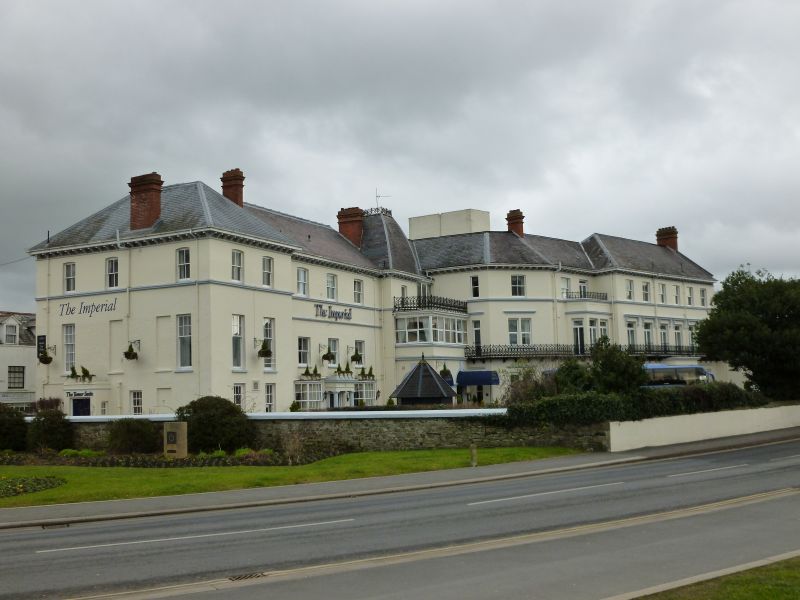 Hotel. Largely 1902 (Pevsner), incorporating a c1800 house at
the W end. Smooth plastered; natural slate roof with lead
rolls; stacks with red brick shafts with corbelled cornices.
c1800 house is symmetrical, 2 rooms wide. The hotel has been
built around this and to the E with a large entrance/stair
hall to E of the house.
3 storeys. Asymmetrical but regular 2:3:2:10-window range
(2:3:2-window to the c1800 house). Deep eaves on moulded
brackets; brick eaves course; moulded string at 2nd-floor cill
level. Old house is symmetrical with Doric porch with moulded
cornice with central roundel and 2-leaf small-pane glazed
door. Ground-floor bay windows have rounded corners and are
glazed with 4-pane horned sashes. The moulded string above was
the cornice of the house before an extra storey was added with
3 similar sashes to the 2nd storey.
The wing to the left has tall small-pane windows on the ground
floor and 6 over one-pane sashes on the first floor and 4-pane
sashes on the second floor.
To right of the c1800 house a one-bay projection has a tall
French roof with wrought-iron railings round the top. A
2-storey flat-roofed entrance block projects off this to the
front with a 2-bay arcade on the ground floor and a third arch
on the return with pilastered round-headed moulded arches with
keyblocks. One opening is a door with plain fanlight, the
other 2 are windows glazed with plate glass. The first floor
of the entrance block is glazed with ribbon windows and
crowned with decorative iron railings.
The remainder of the hotel, 6 bays, has a canted corner and
breaks forward to the right. Ground-floor windows are glazed
with C20 timber 2-pane sashes, including 2 canted bays.
First-floor balcony, probably 1902, on cast-iron brackets with
frontal to match that on the entrance block. First-floor
windows mostly French with high transoms, re-glazed with
plastic windows, have cornices, some on consoles. Second-floor
windows are 2 and 4-pane sashes.
INTERIOR: large open-well timber stair to entrance hall with
turned balusters. The c1800 house has been altered with
ground-floor partition removed and 2 c1900 chimneypieces.
HISTORICAL NOTE: a painting shows the c1800 house as 2-storey
with projecting front wings.
The building is an important feature of Taw Vale and the C19
riverside development close to the Long Bridge.
(Buildings of England: Pevsner N and Cherry B: Devon: London:
1989-: 159).