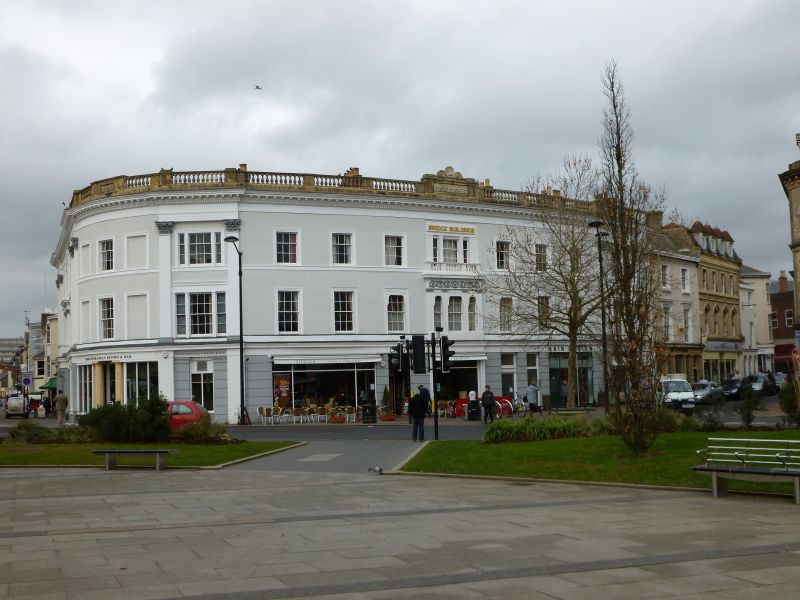 Block of houses, offices and shops, now entirely offices and
shops. Nos 3-7 built 1844 by RD Gould of Barnstaple; Nos 1 & 2
added 1887. Solid rendered walls; stone balustrades; cream
brick at rear of No.1. Roofs not visible from street. Red
brick chimneys.
A roughly L-shaped range fronting both The Square and The
Strand, the corner arranged as a broad curve. The block seems
to be made up of a terrace of conventional houses; Nos 2 & 5
appear to be one room wide and 2 rooms deep with a narrow
open-well staircase beside the back room.
3 storeys. 19-window range; the 6 left-hand windows (facing
The Strand) belong to the 1887 addition. Uniform Classical
design. Ground storey has horizontal channelling with
pilasters at intervals. Upper storeys have pairs of giant
Corinthian pilasters flanking the first, 6th, 10th, and 19th
windows from the left. These windows are of 3 lights, as are
the 4th and 15th windows, which form centrepieces to each of
the 2 fronts; except that the 4th window has only one light in
the 2nd storey. The centrepieces have pilasters with enriched
capitals between and flanking the lights in the 2nd storey;
and panels inscribed BRIDGE BUILDINGS over those in the 3rd
storey. Towards The Strand the 2nd-storey window has a
balustraded balcony on large brackets; on top of its
entablature stands a patterned iron guard-rail. Towards The
Square the 2nd-storey window has foliated scrollwork on the
frieze of its entablature and a balustrade in front of the
window above.
The whole front has continued moulded cills in 3rd storey. Top
entablature with dentilled modillioned cornice surmounted by a
stone balustrade with pedestals at intervals. Over the centre
of each front is a larger pedestal decorated with foliage to
The Strand and key pattern to The Square; each carries a pair
of scrolls supporting the Bridge Trust arms towards The Strand
and a scallop shell towards The Square.
Ground-storey openings have been considerably altered, but
original doors survive at Nos 1 & 2, and to right of No.3;
each has a short moulded panel at the bottom and 2 tall ones
above; patterned fanlights at Nos 1 & 2. Ground-storey windows
at Nos 1 & 2 have 3 mullioned-and-transomed lights, the
mullions designed as slender columns with twisted shafts.
Entrance to No.3 flanked by Greek Doric columns. Upper-storey
windows generally have 6-paned sashes; side-lights 2-paned,
upper 3rd-storey sashes 3-paned. In the 2nd storey the lower
sashes in the 2 left-hand windows, except in the side-lights.
The 8th and 10th windows from the left in each upper storey
are blind.
Short 4-window return to Maiden Street, similar in character
to the main fronts. Flanking pilasters to right-hand window,
the ground-storey window mullioned-and-transomed like those
facing The Strand. Barred sashes throughout, except in the
lower centre sash of the right-hand 2nd-storey window. The
second 3rd-storey window from the left is blind. At left-hand
end, in a projecting porch, is an original 3-panelled door.
The rear walls of the building, visible from Maiden Street,
have 6 and 8-paned sashes.
INTERIORS: partially inspected only at Nos 2 & 5. The former
has late C19 wooden staircase with turned balusters and
newels, the newels with finails and pendants. Moulded cornices
in ground storey, enriched ceiling-band on first floor. The
ground-floor rear room has fireplace with bracketed shelf;
cast-iron grate with tiles. No.5 has original wood geometrical
staircase; cut strings with shaped step-ends; thin square
balusters, the balustrade voluted at the foot. Entrance
passage has at the front a plain dado with moulded rail and
skirting; at the rear a round arch with panelled soffit
springing from square piers with enriched capitals (left side
mutilated). The 2 first-floor front rooms have enriched
ceiling-bands and chimneypieces with bracketed shelves.
One of the earliest works of the distinguished Barnstaple
architect, RD Gould, and makes a significant contribution to
this part of Barnstaple. It was built by the Feoffees of
Barnstaple Bridge both as an investment and to beautify the
approach to the town from the bridge.
(Gardiner WF: Barnstaple, 1837-97: Barnstaple: 1897-: 17;
Cruse JB: The Long Bridge of Barnstaple and The Bridge Trust:
Barnstaple: 1982-: 13-14, 17; Cruse JB: The Long Bridge of
Barnstaple: 1987-: 8-9).