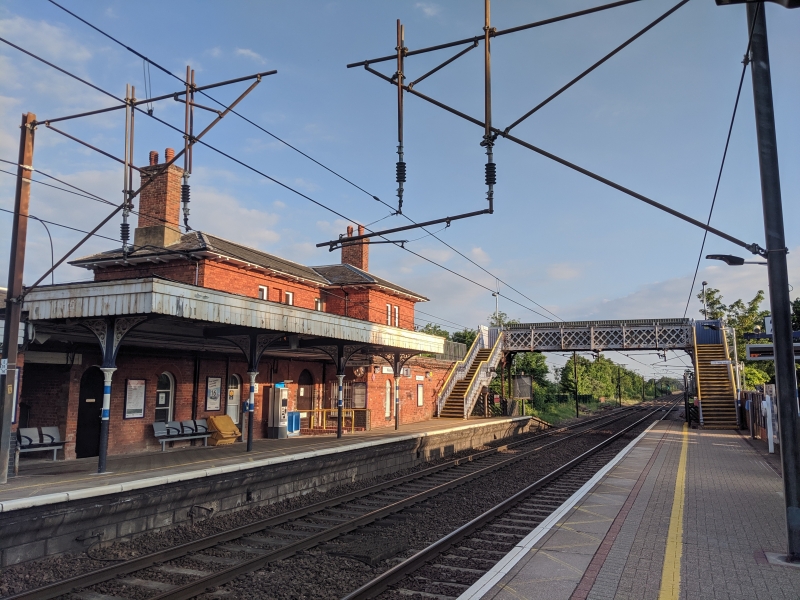 Railway Station and Footbridge. 1850 for the Great Northern Railway, late C19 footbridge. Red brick with minimal stone dressings, Welsh slate roof, cast and wrought iron platform canopies and footbridge. The main building is on the upside. Italianate villa style, but very plain.
Yard elevation of two storeys, the wing to the left stands forward a trifle, blind on the ground floor, first floor band and cill band, paired narrow windows above. To the right the ground floor has a through arch with two arched windows, 3 pane sashes to right, band as before. Paired windows above with central blind panel. Hipped roofs with eaves overhang on brackets, chimney at either end. Waiting room to right with three arched doorways, lavatories to left.
Platform elevation has a small canopy on four cast iron columns with decorative brackets, slightly fretted valance. The features to this elevation are the same as before. All the windows
of the old station house are boarded up.
Interior not inspected.
Wrought iron lattice girder footbridge of the late C19 with cast iron columns and stair railings. This has been raised to accommodate the electric catenaries and shows signs of alteration but has good group value with the station building as does the portal of Welwyn tunnel to the north.
The downside buildings have been replaced.
History: This station was opened as Welwyn on the Great Northern Railway and was changed to Welwyn North by the London and North Eastern Railway when Welwyn Garden City station was opened in 1926. The line was engineered by William and Joseph Cubitt and built by Thomas Brassey.
The main building has been remarkably little altered.
References: R.V.J.Butt, The Directory of Railway Stations, Patrick Stephens Limited, 1995. O.S.Nock, The Great Northern Railway, Ian Allan, 1974.