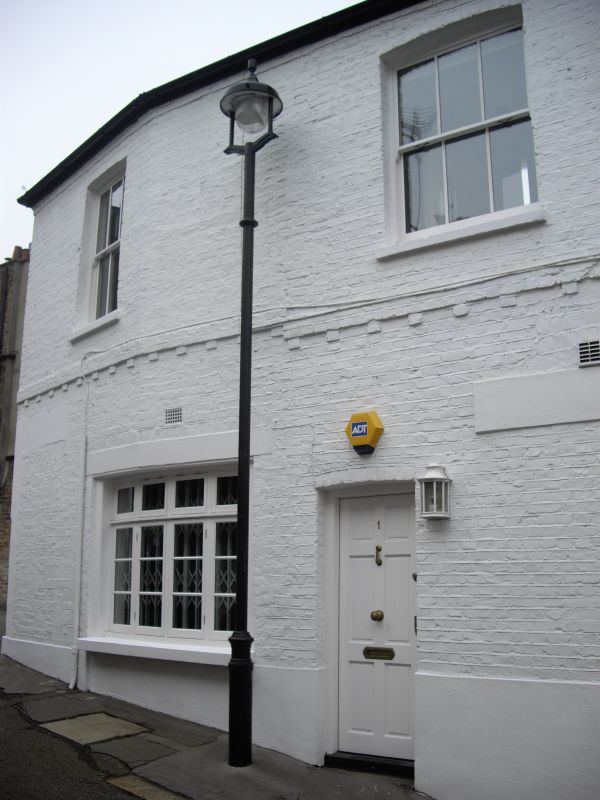 GERALD ROAD, SW1
(South-East side),
Belgravia
No. 17 (including 1 Burton Mews)

Former coach house and hayloft, concealed behind Nos.13 and 15 Gerald Road. Late C19, converted into flats early C20. No. 17a is not of special interest. No. 17 much remodelled in 1930-56 when occupied by Sir Noel Coward. Stock brick with red brick dressings, painted at ground floor level; slate roofs.
Small paned windows with opening casements under gauged brick heads. The ground floor has an elaborate early C20 doorcase in Queen Anne style which has been inserted and some elaborate ironwork over the entrance and to adjoining window with the initials JT. There is a large early C20 casement to the left side elevation and mid-C20 French windows to one side.
Interior of No. 17. A well staircase embellished with finials of carved wooden urns with fruit decoration leads via a corridor with panelled walls and ceiling to the first floor former hayloft which Coward converted into a room with stage at one end, which is said to have had dining alcove below and sleeping arrangements above. The original four wooden bays of the hayloft with iron ties remain but some more elaborate wrought ironwork has been added. There is a bolection-moulded fireplace and two elaborate pairs of double doors. At gallery level there is a purpose-built corner desk with built-in bookcases which overlooks the rest of the hayloft. Separate rooms at first-floor level are his former library which has a bolection-moulded fireplace. A further bedroom has a bolection-moulded fireplace and early C18 style panelling. A guest bedroom has a low flight of steps and oak handrail to bathroom.
This was the principal residence of Noel Coward from 1930 until 1956, the most important years of his fame and where he wrote his most popular works. Coward came to prominence in 1924 with `The Vortex', a controversial play about drug addiction, but it was his nine-year collaboration with C B Cochran (from 1925) which established his ascendency in the world of musical comedy and revue. `Private Lives' in 1930 was followed by `Cavalcade' in 1931 and `Design for Living' in 1932, and a string of hits continued with only a brief pause in the early war years. `Blithe Spirit' in 1941 and `In Which We Serve' in 1942 further established his position as the leading popular playwright and songsmith of his generation, his work encapsulating the fine manners and social mores of upper-class England through these years. In the post-war era his personal performances became so successful that in 1956 he left England for tax exile in Bermuda, Switzerland and Jamaica. No. 17 Gerald Road, with its early Georgian fixtures and touches of frivolity, and in particular with its built-in stage and writing desk, perfectly captures the blend of style, wit and tradition that was the key to his success. It is his very personal signature on the building in which he lived for his crucial middle years that make it of special historical interest for listing.