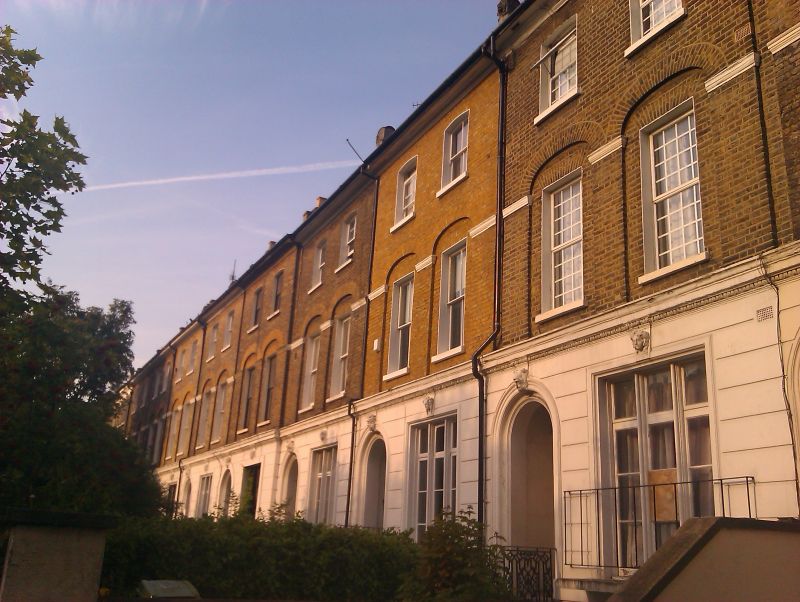 10 terraced houses. Early C19. Stucco treated as banded
rustication to ground floor, and brick in Flemish bond above.
Roofs of slate turnerised and new slates.
3 storeys over basement and 2 windows each. All conform to a
common type: flat-arched entrance with overlight, reached up
steps; entrance flanked by a pair of Tuscan pilasters, gone
from No.31. Entrance set within round-arched porch, architrave
moulded and keystone case to resemble bearded man's head. To
right a nearly square window with architrave, and keyed
lintel, the latter cast to resemble a woman's head; the window
original with three 3-pane casements and transoms.
Storey band between ground and 1st floors, moulded in
egg-and-dart pattern. First floor treated as elliptical-arched
arcade of 2 bays, each bay filled with a flat-arched window,
the arches and lintel of light coloured brick; springing band.
Pair of segmental-arched 2nd-floor windows. Cornice to shallow
eaves. Party wall expressed above roof. Stacks to party walls.
The join between each unit recessed.
INTERIOR: not inspected.
SUBSIDIARY FEATURES: cast-iron railings of original design to
all but Nos 27 & 35; cast-iron balconettes of original design
to 1st floor of Nos 31 & 35 (the latter's partly gone).
These units from a group with Nos 16-64 (even) (qqv) Trafalgar
Avenue.