Islington Mill, Including Engine and Boiler Houses, Warehouse and Stabling 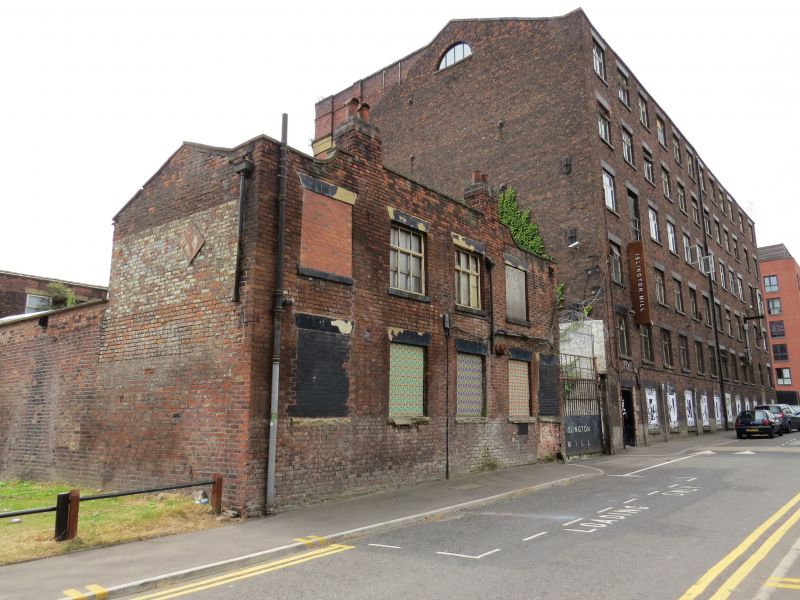 Cotton spinning mill, now used as retail and office premises.
1823. Originally built as a room and power mill by David
Bellhouse of Manchester, with alterations and extensions to
the site, used for doubling by the early C20. Spinning mill is
brick with slate roof, fire-proof internal structure with
cast-iron columns supporting transverse brick arches. Original
structure comprised single central row of columns, but other
rows were added following collapse in 1824. Timber queen-post
roof construction.
PLAN: site comprises main spinning mill, with external engine
house and boiler house, a second mill and warehouse range, and
office and stabling, enclosing a courtyard to the rear of the
site.
EXTERIOR: 6 storeys, 12 bays, with rectangular window in each
bay, and semicircular windows in gable apexes lighting attic
storey. Original internal engine house towards W end, marked
by round-arched window, with stair and chimney tower
originally located to W of it. The engine house was replaced
by an external engine house in the yard, built or rebuilt late
C19-early C20 (and subsequently extensively modified). Lift
tower added to S elevation (possibly extending an original
privy tower) in 1907-8, and stair tower at SE angle added in
1928.
A second mill occupying the west part of the rear of the site
was in existence by c1830, but was itself rebuilt c1901-2.
3-storeyed, brick, with cast-iron and timber internal
structure. The eastern section of this second mill was added
c1840, and survives substantially in original condition, with
stair tower added to W. Taking-in doors suggest its use for
warehousing. Small office building added c1880 to E of site
entrance, a 2-storeyed, 4-window range, with single-storeyed
wing to rear originally including stabling.
HISTORICAL NOTE: the partial collapse of Islington Mill in
1824 is one of the well-documented structural failures of
early fire-proof mills in which poor casting was blamed for
the collapse. Listed as a good example of an early C19
fire-proof mill, which is of additional interest due to the
alterations which were made following its collapse. The
subsequent development of the site is also well-illustrative

of the adaptation and extension typical of early mills which
continued in use as textile-working sites.