A Grade I Listed Building in Plymstock Radford, City of Plymouth 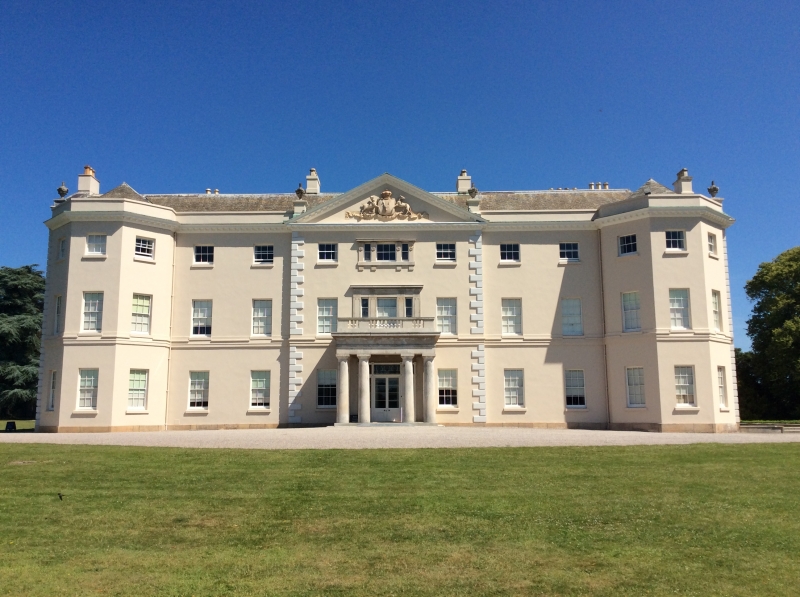 Large country house remodelled from great house. C16 and C17
core is the remains of the former house of Sir John Bagg, but
the predominant character of the house is the result of a
phased remodelling of the house in the C18, much of this work
designed by Robert Adam (1768-72 and 1779-82) and carried out
on behalf of the Parkers, formerly of Boringdon House (qv);
porch added and library enlarged by John Foulston 1818 and
1820.
MATERIALS: stucco with stucco detail including rusticated
quoins to principal outer elevations, otherwise local rubble
with granite dressings; dry slate mostly hipped roofs, the
gables coped and with urns on acroteria, the S and E fronts
behind stuccoed parapets with modillion cornices; rendered
axial, end and lateral stacks.
PLAN: large overall approximately square plan built around 2
courtyards, the principal stair hall possibly in the position
of another courtyard.
EXTERIOR: 3 storeys and 2 storeys, the 3 principal elevations
are symmetrical and articulated and have hornless sashes with
glazing bars, many of which are C18 sashes with thick glazing
bars.
W elevation is 2:3:5:3:2 bays with the central and end bays
broken forward and taller, the end bays as pedimented gables
and with half-domed niches with Classical statues to ground
floor. Central round-arched freestone doorway with triangular
pediment. Flanking the 5-bay centre, the 2-storey bays have
central Diocletian windows over Venetian windows, the central
light of the one on the right now converted to a doorway.
S elevation is 3:2:3:2:3 bays with pedimented central bays
broken forward and the end bays canted. There is a granite
plinth over a hidden cellar, part of which extends in front of
the present line of the house, and there is a moulded
1st-floor sill string. Central bay has coat of arms to
pediment over tripartite windows to 1st and 2nd floors and the
tripartite doorway is fronted by a Doric porch with 2 pairs of
fluted columns, by John Foulston of Plymouth.
E elevation is 2:3:2 bays with the central bays broken forward
and with a balustraded parapet, the end bays surmounted by
triangular pediments with modillion cornices. The central bays

have a plinth with balustrades under the windows and the
central Venetian window has a central sash with fanlight head
above a wooden bottom panel, so that with the lower part of
the sash lifted and the panel opened, it can be used as a
doorway, presumably a later modification.
N elevation is irregular with a canted bay on the left, then a
stair window for a large back stair, then a 2-storey service
range with a single-storey wing projecting in front of a large
lateral stack; right of this is a wide doorway and then the
tall end of the W front.
Inner courtyard has 4 good elevations: the elevation on the N
side of the courtyard has an altered arrangement of mullioned
windows to the ground floor and evidence of former mullioned
windows to the 1st floor. To the E side is a 2-light mullioned
window with hoodmould on the left, above a doorway with a
6-panel door with fielded panels, and on the right a
round-arched stair window with fanlight head. To the S side is
a tower on the left and a bowed stair window to the right. The
W side is a symmetrical 3-window front with central doorway
and C18 sashes with thick glazing bars.
The other courtyard has the kitchen front to the north with 4
large early or mid C19 sashes rising into what was a 2-storey
building; on the east is a 2-window range over a 3-bay
round-arched loggia, and on the S is a 2-storey-plus-attic
6-window range with 1 blocked window opening. To the right
hand end of this range, and of considerable interest, is a C16
or C17 tower with a balustraded parapet, the spaces between
blocked when the tower was heightened to create a bell tower.
Right of this (within the rear entrance passage) is a C16
granite moulded and carved 4-centred arched doorway.
INTERIOR: Saltram contains what is claimed to be the finest
suite of reception rooms in Devon, the best rooms to the S and
W fronts designed by Robert Adam and these demonstrate his
development as a designer, from using the conventional Rococo,
to the low-relief kind of Neo-Classical detail that became his
hallmark and with which he broke new ground in interior
design. The earlier rooms are towards the west and develop to
the east and this development continues in the E range from
south to north terminating in a room which is so Robert Adam
that, were it not at Saltram, it might be taken to be a
reproduction of his style. All the reception rooms have good
plasterwork and their original chimneypieces, doors and window
shutters.
From the west, the rooms include the following principal
features: room 2nd from left has wall panels; eared doorcases;
a Doric entablature; Rococo ceiling plaster with a central
panel containing an angel; a superb chimneypiece with herms, a
broken pediment and a carved overmantel depicting a rural

scene. The next room has a chimneypiece with Ionic columns and
a carved frieze with an egg-and-dart cornice; a rococo ceiling
with 4 cherubs playing musical instruments and a dado with
egg-and-dart and other detail. The SE room has a very light
relief rococo ceiling over a richly carved entablature with a
modillion cornice; a marble chimneypiece with consoles over
pilasters with carved fruit and dado similar to the previous
room; at the N end of the room is a distyle-in-antae
Corinthian colonnade with the ceiling beyond divided into
panels. The very large room north of this and central to this
range is Robert Adam at his most recognisable best: the room
has a coved ceiling vault divided into 3 panels with ovals and
concave diamonds and very light anthemion and other decoration
all painted in pastel colours, the ceiling is set on a moulded
and carved entablature and the walls have embossed wallpaper.
The chimneypiece has marble columns and its original brass and
iron grate. Opposite the chimneypiece is the Venetian window
with fluted columns supporting the central arch, and there are
pilastered doorcases. The room to the north of this range has
a chimneypiece with tapered pilasters and a brass and iron
grate, and the ceiling has a central circle containing 4
semi-circles and an inner circle. The room in the W range are
more simply detailed but have good ceiling cornices and other
C18 and early C19 features. There are 5 staircases, 4 of which
are C18 with turned balusters. The principal staircase is part
of one of the best spaces in the house. The wide open well has
2 landings plus a balconied landing, over a Greek key pattern,
the full length of the room. The staircase has alternate twist
and turned balusters, in groups of 3, over an open string and
with a ramped mahogany handrail. The balcony is carried on a
distyle-in-antis Doric colonnade with an entablature above
each capital in the Roman manner. The lower doorcases have
pediments, the others have moulded entablature, all are eared.
The stair hall is lit by an oval lantern above a carved frieze
and the ceiling below has a modillion cornice. The staircase
next to the main staircase is a small open well, and the
staircase near the NE corner is a larger open well.
Upper floors and service rooms not inspected but all are
likely to be of interest, particularly the 1st-floor rooms
above the reception rooms.
Saltram is a very important house: restrained and gracious on
the outside and extravagant and complex on the inside. The
early visible remnants are but a small part of what survives
of the fabric of the C16 house and this makes the achievement
of the C18 conversion to one of the most fashionable houses of
its time even more remarkable. Saltram survives virtually
complete and unaltered since the C18 with most of its best
original furnishings which are beyond the scope of this
description.
(The Buildings of England: Pevsner N: Devon: London: 1989-:
710-713; Country Life: 23/1/26, 24/4/67, 4/5/67, 11/5/67,
2/6/67, 14/9/67).