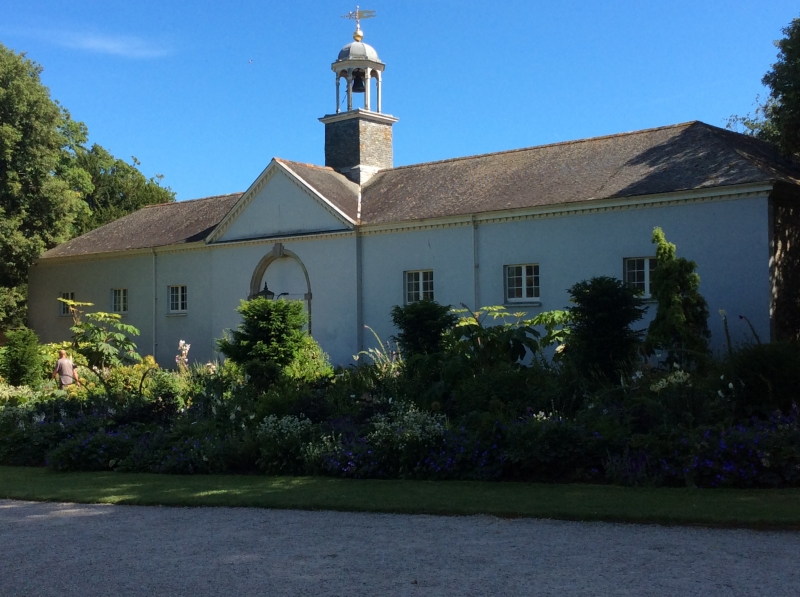 Stable block, coachman's cottage and coach house to large
country house (qv). Mid C18, for the Parkers. Mellow red brick
laid to Flemish bond; dry slate hipped roofs; brick stacks to
coach house and coachman's cottage, and another stack to
ancillary building; clock with octagonal bellcote with
elliptical-arched arcade and finialed lead dome over moulded
cornice set over entrance passage.
PLAN: square courtyard with stabling on all sides plus E side
doubled in depth for coach house on its outer side and the
coachman's cottage to the N end of the adjoining stabling.
Also there are buildings attached to the SE corner.
EXTERIOR: single storey except for the coachman's cottage
which has 1st floor partly in the roof space and coach house
with squat 1st-floor windows set under the eaves. Principal
entrance is central to the N side and has a triangular
pediment with modillion cornices over a presumably re-used C17
moulded granite doorway with triple key block. Each 5-bay
elevation within the courtyard has impost string to recessed
elliptical arches, most with Diocletian fanlight over a
planked doorway, the cottage has 3 round-arched windows to
gabled dormers. Coach house is 7 bays with open elliptical
arches to E side.
INTERIOR: virtually complete where inspected with many
original stalls to the stables, those to S side under plaster
crossed barrel vaults springing from octagonal columns, those
to W side with round-arched stall arcades with unfluted Roman
Doric columns with entablature above the capitals. Those to N
side have later cast-iron and boarded ramped stalls and with
flanking loose boxes, all with brick floors. The room to the W
side of the entrance passage has a plaster ceiling with a
modillion cornice, the other room has a moulded cornice.
This is an important stable block, particularly with the
survival of so many original features of high architectural
quality.