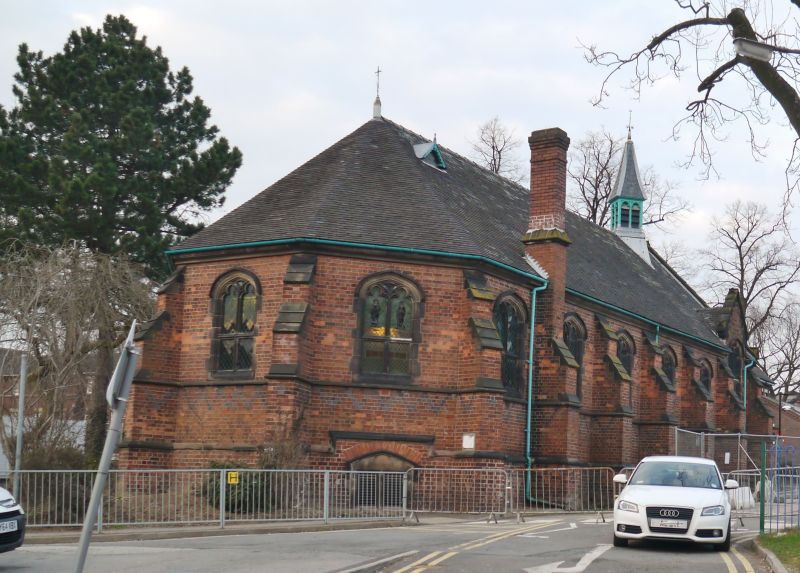 Find accommodation in
Newcastle under Lyme

Former Workhouse chapel, now used as hospital chapel. 1866, with mid and late C20 alterations. By Charles Lynam of Stoke on Trent. Red brick, with ashlar and blue brick dressings. Perpendicular style, complementing the contemporary School block, also by Lynam. Plinth, string courses, buttresses, moulded eaves. Single range, with apsidal end, stair turret to NW, and west porch. Plain tile roof with canted east end with gabled ventilators and finial. At the west end, a square wooden bell turret with pyramidal slate roof and finial. Windows have stone cross-mullions and cusped 4-centred arched heads with hood moulds.
Apse has regular fenestration, with blue brick diaper work below the windows. Four-centred arched mullioned opening to basement below NE window. Main body,S bays, has 5 windows to north and 4 to south. In the west bay, on each side, a gabled through-eaves dormer for the gallery window. North side has a tall coped stack rising from the east buttress. South side has in the east bay a square lean-to porch with shouldered door to basement, and a single window. At the SW corner, a crenellated octagonal stair turret. Coped west gable has a 3-light window and above, a small light under a hood mould. Crenellated square west porch has a 4-centred arched opening covering 2 shouldered doorways, the left doorway blocked. Right doorway has original board door. This layout reflects the segregation of the sexes which was common in churches and workhouses in this period.
INTERIOR: rendered, with moulded sill band and arch-braced hammer beam roof on corbels. The details are similar to the contemporary school block, qv. North east window has stained glass, 1920, the remainder leaded glazing. At the west end, a wooden gallery with blind tracery, carried on wooden posts. Mid C20 glazed screens and doors below the gallery, forming small rooms. Stone winder stair with iron balustrade in the stair turret.
FITTINGS: All late C20, as chapel remains in use for worship. MEMORIALS: Wall tablet, 1983.
HISTORY: Provision of a detached chapel for Christian worship was a significant step in C19 social policy. This is an early example of such a workhouse chapel.