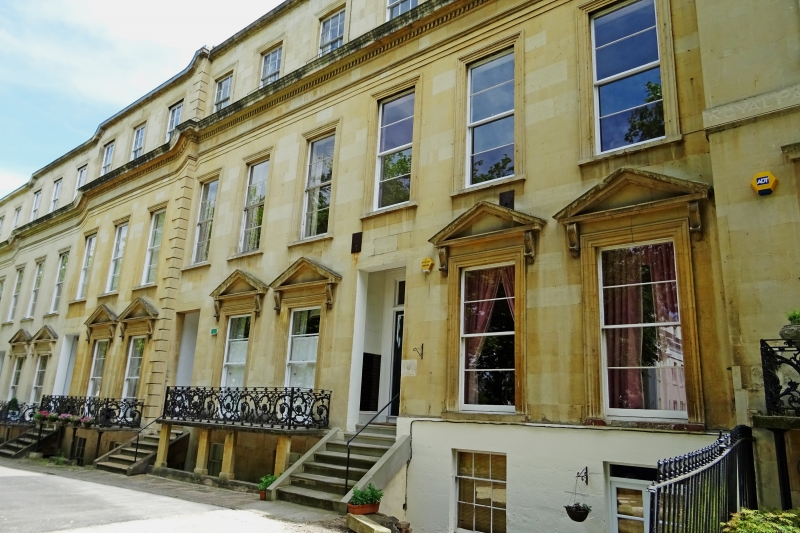 Terrace of 21 houses with attached railings to Nos 1, 3, 4 and 5, now houses, hotels and flats. Numbered right to left, described left to right. c1845-50. Brick with ashlar facades and slate roofs with party-wall brick stacks and wrought- and iron balconies, railings and verandah. Double depth plan with side stairhalls and service ranges to rear. EXTERIOR: 2 storeys with basement, Nos 18-21 and 6-12 also have attic storey and crowning entablature. The terrace slopes upwards with ramped continuous dentil cornice above first-floor windows. Nos.19 and 21 have quoins and 19 breaks forward at right; Nos 13-17 have central breakforward of 3 windows, with end quoins; Nos 6-12 have central breakforward of 9 windows articulated by quoins; Nos 1-5 have central 3-window breakforward. All windows in tooled architraves, those to ground floor have cornices on acanthus cornices, to Nos 18-21 and 6-12 with pediments; sills throughout to first floor. Nos 13-17 have tooled first-floor band. Mainly 2/2 sashes to ground and first floors; first floor Nos 1-5 have mainly original 6/6 sashes except No.2 has tall 6/9 sashes; several retain blind boxes. Basements: 3/6, 6/6 and 8/8 sashes. Attics mainly 6/6 sashes in tooled architraves. Right end entrances: flight of steps (some roll-edged) to 2-panel doors, some glazed, with overlights, in recesses; No.21 has blind box around entrance. To attic a ramped cornice and blocking course. Left return, 4-window range: ground and first floors have 2/2 sashes, second floor has 6/6 sashes and 1 blind opening.
INTERIOR: not inspected.
SUBSIDIARY FEATURES: Nos 1, 3, 4 and 5 have railings to sides of steps. Ground floor has continuous balconies to each house with acanthus scroll motif, after a design by LN Cottingham; No.11 has individual balconies to first floor. No.21 has verandah to left return. No.21 unoccupied and somewhat dilapidated at time of Review.
HISTORICAL NOTE: the Skillicorne family sold land for this development in 1837. By 1843 Henry Davies described it as 'until lately, occupied as pasture and orchard ... but already 2 handsome rows of houses, called Royal Well and Bayshill Terrace, have now been erected, as also a number of detached villas .. several of which are occupied by resident families of affluence and station, and others are in an unfinished state'. Verey considered this, 'one of the most charming of all Cheltenham's terraces'.
(Chatwin A: Cheltenham's Ornamental Ironwork: Cheltenham: 1975-1984: 46; Hart G: A History of Cheltenham: Stroud: 1965-1990: 172-3; The Buildings of England: Verey D: Gloucestershire: The Vale and The Forest of Dean: London: 1970-: 124, 147; Radford S: The Terraced Houses of Cheltenham 1800-1850: 1992-: 146-153).