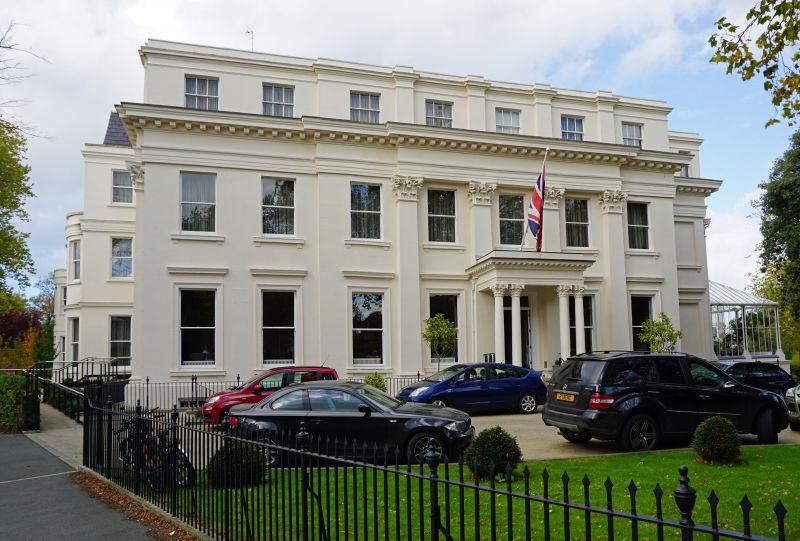 Villa, now hotel and attached railings. 1847, by Samuel Onley,
with later additions and alterations including c1870-80
conservatory to right and c1890s ranges to rear. Stucco with
slate roof and iron balustrade (possibly Coalbrookdale).
EXTERIOR: main range of 2 storeys with attic and basement, 9
first-floor window range which breaks forward to form stepped
facade of 2:1:3:1:2. The 3-window entrance bay is articulated
by 2-storey Corinthian pilasters; continuous frieze,
architrave and modillion cornice; above, to attic are Tuscan
pilasters with continuous cornices and blocking course;
central tetrastyle Corinthian porch has frieze, architrave,
dentil and modillion cornice; flight of renewed steps to
glazed doors in architrave with acanthus modillion cornice.
Range to right is recessed more deeply and is blind. Windows:
ground and first floors have 1/1 sashes with lugs (blind boxes
renewed) in plain reveals with sills on feet, those to ground
floor have tooled architraves, frieze and cornice; otherwise
8/8 (basement), 3/3 and 6/1 (attic) sashes. Left facade a
4-window range has 4 similar Corinthian pilasters. Right
3-window range similarly articulated. Glazed conservatory has
hipped roof, slender columnettes.
INTERIOR: includes open-well staircase with wreathed handrail
and ornamental wrought-iron balusters. Shutters to most
windows. Main reception room at right has 3 marble fireplaces,
one Regency style. Conservatory has Coalbrookdale tile floor.
SUBSIDIARY FEATURES: to sides of porch a iron balustrade of
ornate panels with female masks; there are similar panels to
Farnley Lodge, Duoro Road.
HISTORICAL NOTE: the Bayshill estate was developed by a joint
stock company which purchased land from the Skillicorne family
in 1837. By 1843 Henry Davies, in his Guide to Cheltenham,
described 'a number of detached villas .. several of which are
occupied by resident families of affluence and station, and
others are in an unfinished state.' By c1845 the company was
bankrupt and Onley bought much Bayshill property.
Little considers this to be one of a `superb group (of villas)
that make Bayshill Road one of the great roads for
architecture in all England'.
(Sampson A and Blake S: A Cheltenham Companion: Cheltenham:
1993-: 28; Chatwin A: Cheltenham's Ornamental Ironwork: