Numbers 11 and 15 to 21 and Attached Railings and Gates 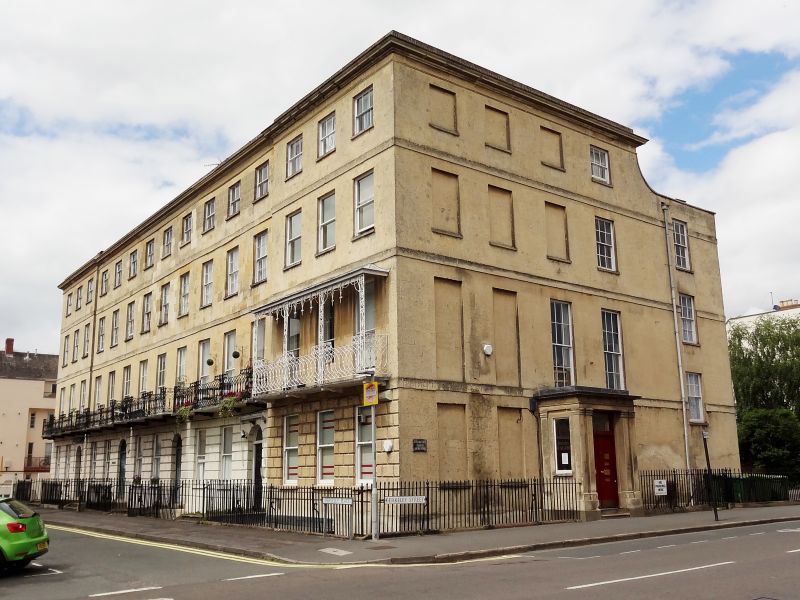 Entry Name: Numbers 11 and 15 to 21 and Attached Railings and Gates

Terrace of 5 houses, now offices and flats, with attached
railings and gates. c1810-20, on the Post Office Map of 1820,
but not on Mitchell's Map of 1810; with later additions and
alterations. Ashlar over brick with slate roof and stucco
party-wall stacks, wrought- and iron verandah and balconies,
railings and gates. Double depth plan with full-height service
wings to rear.
EXTERIOR: 4 storeys with basements, 18 first-floor window
range (3 per house). Rusticated ground floor, drawn into
voussoirs over doors and windows; floor bands; crowning frieze
and cornice. First floor: tall 6/6 sashes where original,
otherwise 1/1; second floor: mainly 6/6 sashes as original
except to right are 1/1, all with sills; third floor: 3/3
sashes with sills throughout; ground floor: 6/6 sashes where
original, otherwise 1/1; basement has 6/6 sashes; all in plain
reveals and with sills. Entrances to right: round-arched
openings with 6-fielded-panel doors, fluted frieze and
fanlights, that to No.21 retains batwing-and-circle motif;
further entrance (to No.11) to right return: 6-fielded-panel
double doors with fanlight in solid porch with paired Doric
pilasters. Right return has 4 first-floor window range, ramped
down to 5th window in service range: five 6/6 sashes
altogether with a 6/1 and 3/3 sash, otherwise blind openings.
Rear has 6/6 sashes where original; No.17 has full-height bow.
Left return has 'BERKELEY STREET' inscribed to first floor
band.
INTERIOR: No.11 has lobby with 6-panel, part-glazed door with
fluted architrave and sidelights which continue round as wide
overlight with beading; narrow-open-well staircase has stick
balusters with panels of scrolled wrought-ironwork and
wreathed handrail; No.21 has similar part-glazed door to
lobby, sidelight and fanlight with decorative glazing bars;
original joinery includes shutters to some windows; otherwise
not inspected.
SUBSIDIARY FEATURES: continuous balcony to each house, except

to right a verandah, all with concentric circle motifs,
verandah has frieze and tent roof. Spearhead railings across
front and to sides of entrances, with similar gates to
basements, the stanchions have urn finials; railings at No.21
supplied by William Churchill: urns marked with a 4 leaf
clover. Some bootscrapers.
HISTORICAL NOTE: The Berkeley family were prominent landowners
and a powerful family in Cheltenham during the C19, providing
the Liberal MP for 60 years.
Originally the houses had formal gardens in front, these now
form a public space. This is an early and substantial terrace
retaining much of its original appearance, well set back from
London Road, one of the main routes into Cheltenham, and
forming an architectural unit with Nos 1-9 (odd), Berkeley
Place (qv).
(Chatwin A: Cheltenham's Ornamental Ironwork: Cheltenham:
1975-1984: 54; Radford S: The Terraced Houses of Cheltenham
1800-1850: 1992-: 34-39; Rowe G: Illustrated Cheltenham Guide
1850: Cheltenham: 1845-1969: 72).