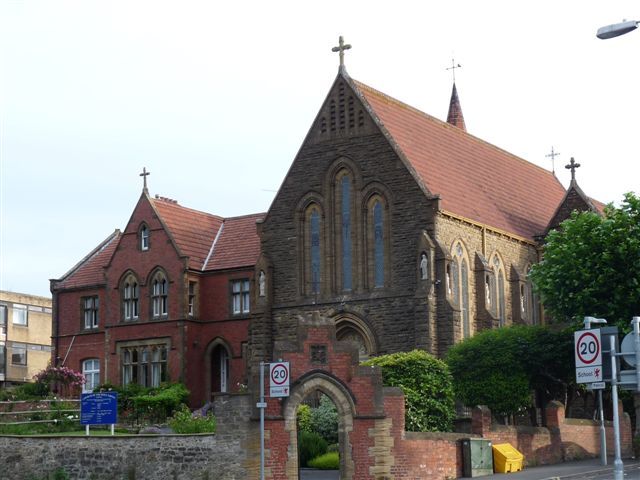 Roman Catholic church, walls and gateway. 1894-99; designed by Father (later Canon) AJC Scoles. Some internal alterations and updating of furnishings during the C20.

MATERIALS: constructed of rock-faced Hamstone, brought to course, with freestone dressings under a red clay double-Roman tiled roof with stone-coped gable ends and cross finials to the gable apexes. The sacristy is built of red brick under a red clay tiled roof.

PLAN: the church is orientated approximately N to S and consists of a five-bay nave, a sanctuary with a polygonal apse, E aisle and Lady Chapel, a sacristy to the W, and a NW tower. Attached to the W side of the church is the presbytery (Grade II-listed). For the purposes of this description, the rest of the text will follow conventional liturgical orientation.

EXTERIOR: it is in the Early English style. The W end has a doorway with two orders of shafts and a deeply-moulded arch containing a carved tympanum. Above are large tripartite lancets with nook-shafts and there are lancet ventilation slits with louvres to the apex of the gable. To the left is the brick-built sacristy which has a three-light stone mullioned window with hoodmould to the ground floor and a first-floor window of three lights with pointed heads. The side elevations of the nave have tall, two-light windows with plate tracery, continuous hoodmoulds and buttresses with weathered offsets. The upper sections of the buttresses have niches containing statues of saints which have been added in stages since 1928. There is a cusped rose window to the E end of the Lady Chapel. The polygonal apse of the sanctuary is divided into five bays by buttresses, also with niches containing saints, and has a continuous hoodmould. The small tower to the right has a polygonal louvred belfry and a short, tiled spire. The rear elevation of the sacristy has tall lancets with a continuous sill band.

INTERIOR: the walls are plastered and the dressings are of Bath stone. The nave has a two-bay arcade with octagonal piers and moulded arches to the S aisle and two pairs of arched openings at first-floor level in its N wall through to the organ gallery above the sacristy. The nave has a waggon roof with moulded trusses springing from carved corbels. There is a tall moulded arch to the sanctuary which has blind arcaded lower walls with sedilia and aumbry, and lancets above that have nook-shafts. The elaborate reredos was repainted and gilded in 1974; the high altar of 1899 by Wall & Co of Cheltenham to Scoles’ design incorporates coloured marbles, onyx and alabaster. The forward altar is carved from Bath stone and dates from 1981. The Lady Chapel has a marble altar, also of 1899 by Wall & Co and an elaborate stone reredos. A tablet commemorates Canon Scoles and the opening of the church in 1899. Altar rails of 1924, by G Raymond, dismantled in 1969 and re-installed 1974; the church still retains its original altar rails on the main altar but they were not correctly positioned. Octagonal stone font and statue of the Sacred Heart on a pedestal with marble colonnettes added c1901 to Scoles’ designs. Other furnishings date to the 1920s: carved pulpit of 1923 by G Raymond, re-configured and re-sited to its present position in 1974; statue of St Joseph (1923, Raymond); altar rails to the sanctuary and Lady Chapel (1924, Raymond) which were dismantled in 1969 and re-installed 1974, though they were not correctly positioned. The Stations of the Cross are carved from Caen stone (1926, Wall & Co), and the organ of 1928 is by George Osmond of Taunton. There are five stained glass windows in the apse, depicting the four Evangelists and an abstract design (centre). The rose window in the Lady Chapel depicts the Assumption. The N windows of the nave depict the Holy Spirit, flanked by the arms of St Francis de Sales and Bishop Rudderham. The other windows have modern (probably 1970s) antique glass with religious emblems.

SUBSIDIARY FEATURES: close to the W door is a tapering, stone column surmounted by a replica of a medieval Crucifixion panel; the original is displayed within the church.

To the S and E of the church are boundary walls, built of stone rubble and red brick respectively, and with stone copings. The E section and a short length of the S wall were originally topped with metal railings, but these have been removed. At the SE corner is a gateway constructed of red brick with Hamstone dressings. The archway has chamfered jambs and a pointed head with a hoodmould, and a metal gate. Above the archway is a stone plaque bearing the arms of Canon Scoles and the motto ‘omnia aeternitati.’ The top of the gateway is stepped and is surmounted by a metal cross.

During the last decades of the C19, Mass was held in a chantry chapel which was rented by the Catholic community. In 1896 Father (later Canon) Alexander Scoles, who became the first resident priest at Yeovil in 1891, purchased land for a Roman Catholic church and a presbytery. Scoles was noted as an architect and planner, and he designed both buildings. The presbytery (Grade II-listed) and sacristy were built first; the former completed in 1895, with the sacristy serving as a temporary chapel until the church was completed in 1899.

The foundation stone for the church was laid on 2 June 1897 by Bishop Brownlow, accompanied by Scoles as the founder and Lady Arundell of Wardour as sponsor. The church was opened and consecrated on 17 May 1899. A medieval stone panel depicting the Crucifixion which had been found near the Anglican church in 1854 and had latterly served as the altar crucifix in the chantry chapel was mounted on a stone column and erected in front of the new church. The medieval panel has since (1975) been relocated within the church and replaced with a replica. In 1903, the care of the parish was taken over by the Missionaries of St Francis de Sales, an arrangement which continues today. A number of furnishings were installed over several years in the 1920s, including a new pulpit, altar rails, the Stations of the Cross and the organ. In the 1940s, the interior of the church was painted white. Historic photographs indicate that this replaced a darker and warmer scheme which was described in 1928 ‘The upper part of the walls is plastered in terra-cotta tints, and the lower part in Pompeian-coloured polished cement, which, contrasting with the large amount of Bath stone and carving, gives the whole a warm tone of colour’. In 1969, the altar rails and the pulpit were dismantled, and in 1974, they were re-installed, in the case of the pulpit in smaller form and against the N side of the sanctuary arch. In the same year the reredos was coloured with blue and gold leaf. In 1981, a plain new forward altar of Bath stone was added.

The detached parish hall to the rear of the church was added in c1956.

The Roman Catholic Church of the Holy Ghost, boundary walls and gateway are listed at Grade II for the following principal reasons:
* Architectural interest: the church is in a well-executed Gothic-Revival style, with good massing and crisp detailing, designed by the priest and church architect Canon AJC Scoles;
* Interior: this is well-handled, with fine carving and, despite some mid- to late C20 reordering, retains interesting late C19 and early C20 fixtures and fittings, including those by Wall & Co of Cheltenham and G Raymond;
* Group value: the church, gateway and boundary walls form a significant grouping with the attached presbytery, also listed at Grade II, with which they share a strong visual, physical and historic relationship.