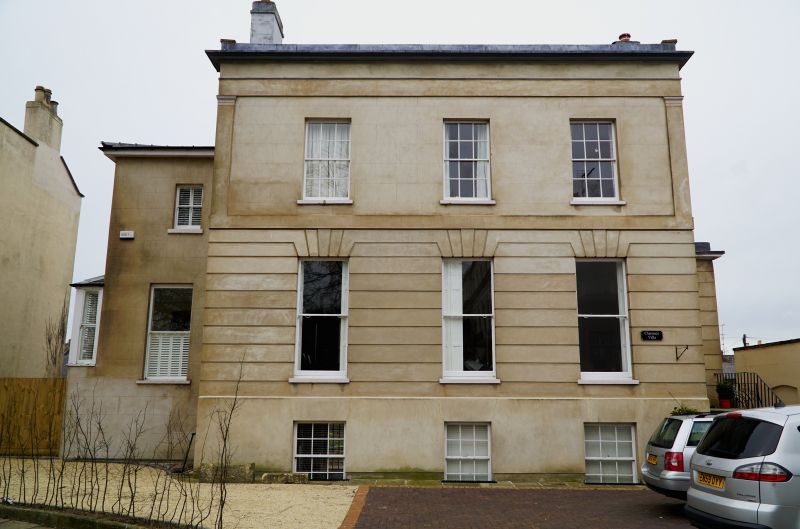 Villa. 1839-40. Stucco over brick with concealed roof and tall
end stucco stacks (2 each side) with cornices; iron railings.
EXTERIOR: 2 storeys, 3 first-floor windows with 2-lower-storey
recessed service bay to left return and single-storey porch to
right return. Stucco detailing to main range: banded
rustication to ground floor; first-floor band surmounted by
end pilasters, architrave, frieze and cornice. 1/1 sashes to
ground floor; 6/6 sashes to first floor, with 2/2 sash to
service bay. Basement has 6/6 sashes. Entrance to right
return: flight of roll-edged steps to 5-panel door with
overlight in soled porch with banded rustication and
voussoirs, cornice and blocking course.
INTERIOR: not inspected.
SUBSIDIARY FEATURES: railings with stick balusters to sides of
steps.
HISTORICAL NOTE: originally known as Clarence Villa and built
as part of the development of this area undertaken for Joseph
Pitt in 1825-42 (the Pittville Estate), the general layout
being designed by the architect John Forbes. Clarence Square
was laid out in the late 1820s, building began in 1832. The
Square was named after the Duke of Clarence, who became
William IV in 1830.
(Sampson A and Blake S: A Cheltenham Companion: Cheltenham:
1993-: 30; Blake S: Pittville: 1824 - 1860.: Cheltenham:
1988-: 23,61).