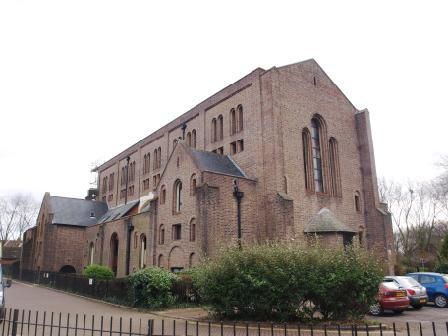 Church, now flats. 1915-16. By JD Coleridge. Converted to 40
flats 1986/87. Timber roof was destroyed by incendiary bombs,
Second World War and restored 1951 by Paul Coleridge. Lady
Chapel restored 1963 by Arthur Llewellyn-Smith. Red/grey
bricks in Flemish bond. Welsh slated roofs.
PLAN: 5-bay aisled nave, 1-bay chancel with apsidal sanctuary.
Lady Chapel on south side of chancel with vestry on north
side. Former entrance on west side of nave with apsidal
baptistry at centre. The 1986/87 conversion to flats has
maintained the integrity of the original internal elements.
EXTERIOR: west face of nave has a low apsidal baptistry with,
at centre, a round brick stepped arched window with stepped
brick jambs. To left and right is a late C20 door, each set
under a flat brick arch and further left and right are 3 tiers
of late C20 windows each set under a round brick arch. Stepped
buttress to left and right corners of nave. Nave has 3 narrow
recessed windows each with stepped brick jambs and round arch,
centre window taller than flanking windows.
South face: former porch at far left with facing stone coped
gable. Round brick arched entrance with late C20 brick infill
and window, flanking round-headed brick window openings each
with late C20 brick infill and window, 2 tiers of late C20
windows each set under rounded brick arch. Low lean-to roofed
aisle between porch and projecting former chapel on right has
late C20 tall brick round-headed opening at centre. Roof over
opening has been removed exposing the nave columns with late
C20 brick wall infills with 3 tiers of late C20 windows, each
set under a flat brick arch. To left and right of centre is a
late C20 recessed panel with stepped brick round arch, each
with late C20 window and two tiers of smaller flanking
windows. On far right is the projecting former chapel with
stone coped facing gable, corner buttresses and original brick
arched window opening with late C20 brick infill, recessed
2-leaf late C20 door and windows. Further right are 3 round
brick arched recessed windows. Nave has 6 paired brick
round-arched clerestory windows, each pair set within a
recessed brick panel. Below each window is a small late C20
window each under a flat brick arch. East face has apsidal
sanctuary to chancel with on left and right facing stone coped
gable of chapel and vestry. North face is similar to south