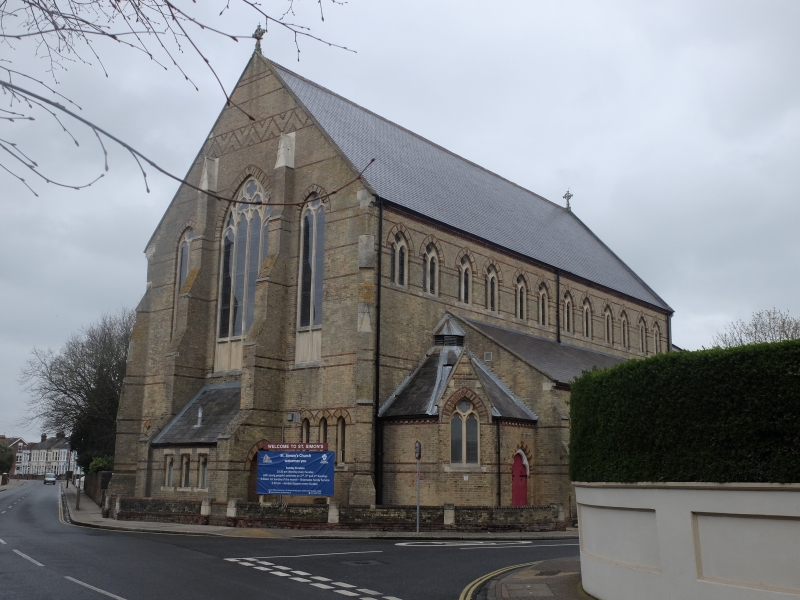 INTERIOR: north and south arcades to aisles have stone columns
supporting stepped red and yellow brick pointed arches, each
with brick roll moulded and label. Set within the arcade
spandrels are circular panels in red and yellow brick
inscribed with the Beatitudes. Clerestory windows set under
patterned yellow and red brick pointed arches. Nave has queen
post roof with diagonal boarded ceiling to rafter soffits, and
aisles have lean-to boarded ceilings. Boarded ceiling to
chancel. Full height chancel arch with red and yellow brick
pointed arch springing from brick piers, each with 3 tier slim
stone column set within recessed corner of brickwork. North
and south arcade to chancel, each with central stone column
with flanking brick pilasters. 2 brick pointed arches lead to
organ loft at south and vestries to north. Over each opening
is a small 5-bay open clerestory, each with pointed brick arch
springing from paired stone short columns with abacus. Below
each of the 5 apsidal windows is a recessed panel with
patterned tiled mural; centre 3 panels have pointed heads and
contain texts. 2 bays at west end have inserted late C20
partition to form church centre. Chancel has stained glass
windows.
(Balfour A: Portsmouth: Highgate Hill, London: 1970-: 55;
Lloyd DW: Buildings of Portsmouth and its Environs:
Portsmouth: 1974-: 127; The Buildings of England: Pevsner N &
Lloyd DW: Hampshire and the Isle of Wight: Harmondsworth:
1967-: 443; Offord J: Churches, Chapels and Places of Worship
on Portsea Island: 1989-: 73, 74, 75).