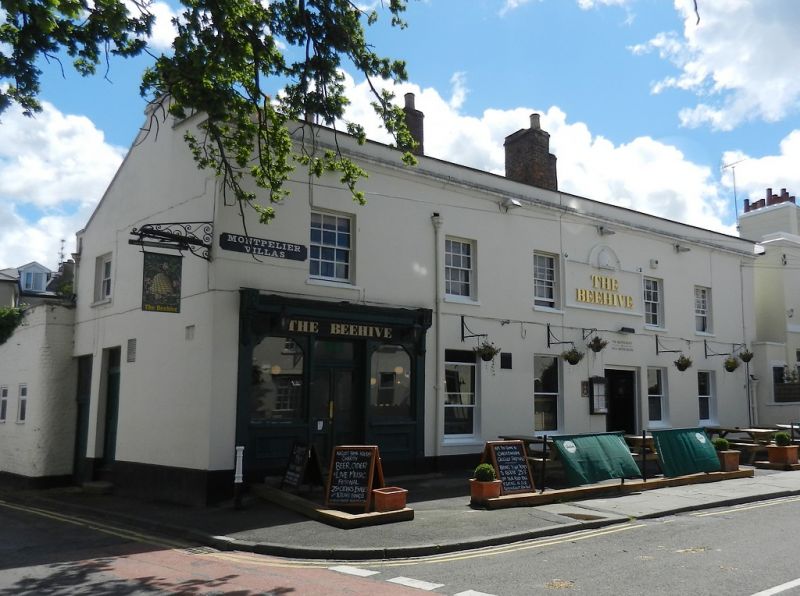 3 units originally (possibly an inn and 2 dwellings) with
coach house, now inn with garages to rear. 1822 with later
alterations including c1870-80. Stucco over brick with tall
hipped slate roof over right 4-window range, otherwise
concealed, and 5 tall end and front brick stacks.
PLAN: 3-cell with narrow single-storey carriageway between 2nd
and 3rd cells; originally to left the men's bar with mixed bar
to centre and probably out-sales behind this (now all one
room) reached by a through corridor, to the right of which was
a dining area with staircase behind; to first floor are
bedrooms at front with central corridor, room at left end,
formerly with staircase leading to attic (now blocked off); to
rear a large assembly room.
EXTERIOR: 2 storeys, 5 first-floor windows. Stucco detailing
includes crowning cornice and blocking course with copings;
name panel to first floor has rectangular roll-moulded
surround with raised segmental 'open pediment' over beehive,
and with slogan, 'by industry we live'; to angles are masonic
symbols. Ground floor has four 1/1 sashes to right; first
floor has 6/6 sashes, all in plain reveals and with sills. To
left a shop/pub front has central double part-glazed, 4-panel
doors with overlight with oval pane; windows to either side
have pierced decoration to corners of frames, frieze, cornice
on corbel brackets with foliate decoration. Off-centre right
entrance (to passage) has double, part-glazed doors with
margin-lights. Rear: central section set back on iron column
at ground floor forming wide porch; first floor has 4 tall 6/6
sashes.
INTERIOR: front ground-floor room has 2 iron fireplaces with
eared surrounds and foliage and fruit to frieze; bar (to left
part) a quarter circle has wooden lower part with simple
Gothic columns, behind bar a Gothic arcade with columns
supporting arches and grapes in the spandrels. Room to rear
has entrance onto passage, a part-glazed door with windows
with glazing bars to either side, that to left curved on
section. Straight-flight staircase has stick balusters and
wreathed handrail. First-floor room to rear has gallery to
south side with panelled balcony and narrow pillars above (now

partly boarded in) with narrow access staircase leading up,
deep cornice and tooled architraves to windows. Cellars have
barrel vaults in part and retain brick shelves; cellars extend
under street at front.
HISTORICAL NOTE: the earliest houses on the street are shown
on Merrett's Map of 1834. The hotel was recorded as The
Beehive in the 1850s census. It is reputed that wool auctions
were held in the rear upper assembly room during the C19 and
was apparently used for meetings of the Freemasons during the
early part of the C20. Coach house at rear damaged by fire
c1970. Montpellier Villas was originally known as Montpellier
Retreat.
(Blake S: 'The Unfortunate Mr Forbes': Cheltenham Local
History Society Journal: 1989-: 7-27).