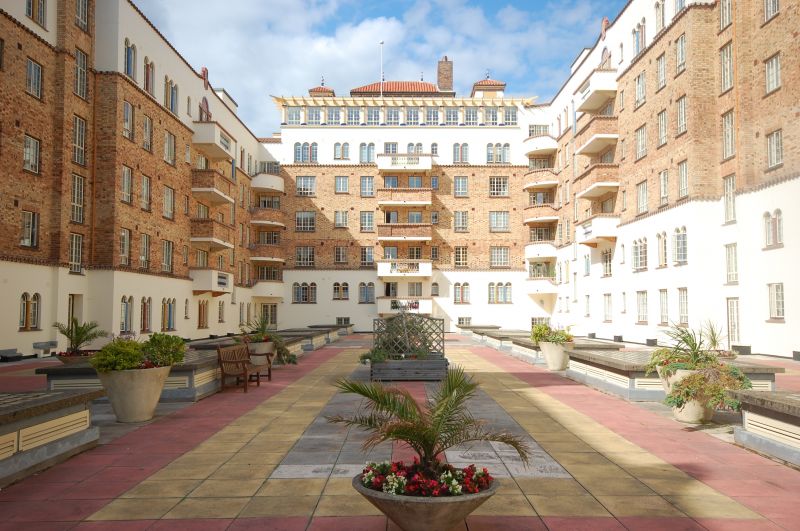 Block of 164 flats, with penthouse and office, over basement garage. 1935-8 by Hector O'Hamilton. Pale brick, with areas of render, particularly to ground and upper floors, faience tiling, and concrete floors. Flat roof behind high parapets edged with pantiles, and with pantiled roofs over staircase towers and over penthouse. Single stack serving boiler house. U-shaped plan around central courtyard, set over garage. The flats, on five floors, are set in five blocks, with corridor access via separate residents and trade stairs and lift from each of six entrance doors (the central block' C' is served by the main entrance as well as its own). Through access between blocks on ground floor only. The estate office projects on the ground floor of Block' C'. The exterior is in a delightful Spanish mission style, with extensive use of coloured faience around doors and in window jambs. Metal casement windows with small panes, round-arched to ground and fifth floor, where coloured jambs predominate. Projecting balconies of brick and render to the larger flats, with coloured balustrades and supported on console brackets. Glass rooflights to the basement car park. The six entrances with double panelled doors, set in lively decorated surrounds of brightly coloured faience, with barleysugar engaged columns under Ionic capitals and block designation (A-E, main entrance) in faience lettering. French doors with small panes to courtyard. Attached brick retaining walls at entrance to courtyard. Interiors: The residents' staircases with jazz modern metal balustrading, those for tradesmen with stick balusters. Interiors of flats not inspected but understood to have been modernised. San Remo Towers is one of the most comprehensive seaside developments of flats to be erected in the 1930s. It was planned as early as 1935-6 by Armstrong Estates Limited of Guildford. It was opened on 1 June 1938 as 'a magnificent block of 164 superior flats, o96-260 per annum rental, garage for 130 cars'. Facilities offered as inclusive in this price included centralised hot water and central heating, an auto vac' cleaning system, centralised telephones, a resident manager, a porter, daily maid, boot cleaning and window cleaning services. There was a Residents' club with a reading room card room, billiard room and library, and a children's recreation and games room. There were kiosks in the ground-floor lobbies selling tobacco and convenience items, where the staff took orders for the local tradesmen. The fifth-floor restaurant offered a la carte meals, which could be taken at pension rates of 38s per week. A simpler dinner cost 2/6d. The use of an American architect, Hector O Hamilton, may be an explanation for the building's large range of facilities, including the grand underground car park and sophisticated servicing. The residents' club was converted to a penthouse in the 1950s, but the block retains its select tone. The elevations were described in 1940 as dignified and select and harmonise with the general surroundings'. Today they are admired as for the very striking way in which they stand out from their surroundings as a piece of 19305' exotic fantasy transported to seemly Bournemouth. San Remo Towers is one of the most impressive seaside developments in England of its period. Source: Waycotts, San Remo Towers, 1940 (letting brochure).