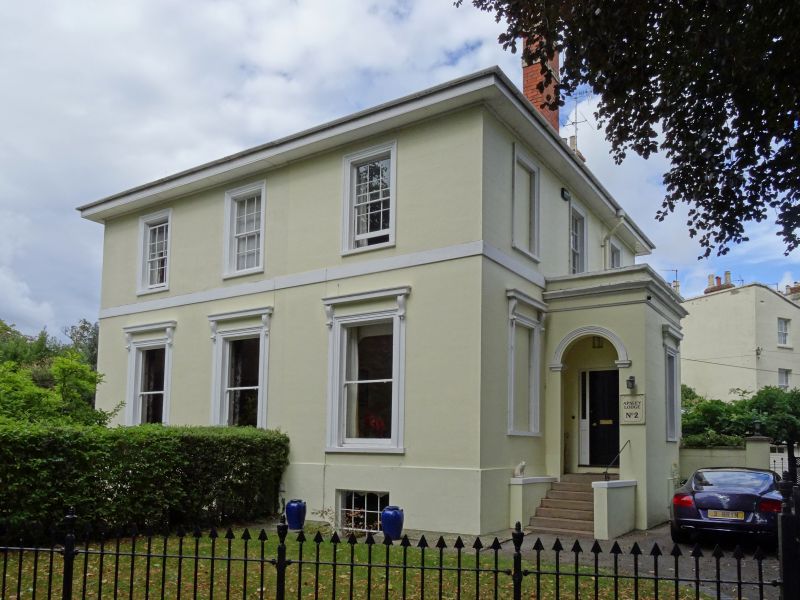 Villa, now 2 dwellings. c1860-70 with later additions and
alterations including mid-C20 attics to rear. Stucco over
brick with hipped slate roof, 4 brick end and rear stacks.
EXTERIOR: 2 storeys on basement, 3 first-floor windows, with
2-storey entrance bay set back to left and single-storey porch
at right, and with range to rear. Stucco detailing includes
first-floor band, tooled architraves to windows, those to
ground floor with cornices on consoles. Lugged 1/1
ground-floor sashes and 6/6 first-floor sashes. Entrances to
right and left; to left a flight of steps to round-arched
opening with tooled head and imposts, within are 4- (raised
and fielded) panel double doors and panelled overlight; blind
window above. Further entrance to right: flight of steps to
round-arched opening with tooled head on imposts, within a C20
4-panel door with sidelights. Left return has 6/6 sashes and
blind openings, all with tooled architraves as before. Right
return: 3 first-floor windows in tooled architraves; 1 window
to ground floor has tooled architrave and cornice on console
brackets; first bay blind then 6/6 sashes.
INTERIOR: noted as having retained original joinery including
panelled shutters to windows and 4-panel doors.
HISTORICAL NOTE: The Circus was laid out in 1839-40 by Cope on
land purchased from Joseph Pitt. However the basic layout of
the Pittville Estate was designed by John Forbes. Apsley Lodge
is later than most of the villas on the Circus, but a
significant element in this impressive layout.
(Sampson A and Blake S: A Cheltenham Companion: Cheltenham:
1993-: 47,96).