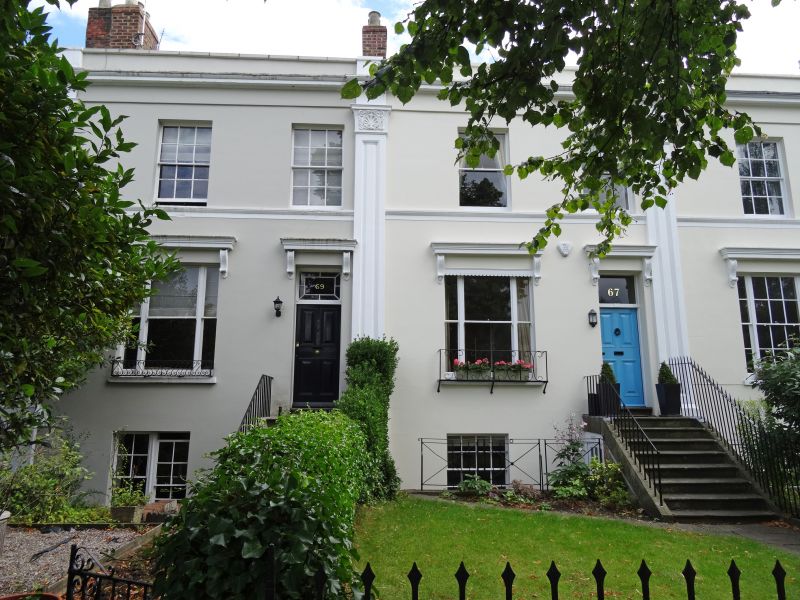 Terrace of 14 houses and attached railings to Nos 47-57, 65
and 67. Numbered right to left, described left to right.
c1840-50 with later additions and alterations including C20
attics to No.73. Possibly by Abraham Tyler, builder. Stucco
over brick with slate roof where original, and brick party-wall
stacks; iron window boxes and railings. Double-depth plan,
mainly with side hallways, except central hallway to left
house and with service ranges to rear throughout.

EXTERIOR: Two storeys on basement and with attics to left
(No. 73) and to Nos. 55 and 53, twenty-nine first-floor windows (three to
left house, then two per house). Stucco detailing includes
pilaster with sunk panel and anthemion motif to capital to
party-wall, except at left there are Doric pilasters to ends
and between windows; crowning entablature (raised to left); to
ground-floor windows have tooled architraves and windows and
doors have cornices on corbel brackets; first-floor moulded
sill bands except to left house. 6/6 sashes where original,
those to ground floor are tripartite 6/6 between 2/2 sashes,
otherwise tripartite 1/1 sashes, some with lugs; basement has
8/8 sashes; all in plain reveals and with sills. Entrances:
that to left house is central and within distyle Doric porch
with triglyphs and metopes to frieze, then one to left,
otherwise at right, flights of steps (roll-edged where
original) to 3- and 4-panel doors, some part-glazed, with
overlights (with margin-lights where original). Left return: 3
windows deep, mainly blind and with 6/6 sashes.

INTERIOR: noted as having retained original joinery including
panelled shutters to some windows.
SUBSIDIARY FEATURES: Nos 53, 57 and 69 have window boxes with
scroll motifs, that to No. 71 is ornate. Mainly stick
balustrades and arrowhead railings and some scrolled
balustrades to sides of steps throughout; area railings to Nos.
51, 65 and 67 have X-motif. Arrowhead dividing railings with
anthemion finials to left of Nos. 47-57; No. 51 has forecourt
arrowhead railings with urn finials.
HISTORICAL NOTE: Abraham Tyler, builder, is known to have
constructed many of the houses on the NW side of Prestbury
Road c1840, they are shown as laid out on Merrett's 1834 Map,
whereas the SE side is not. No.73 thought to have been by
Tyler.