A Grade I Listed Building in Marske-by-the-Sea, Redcar and Cleveland 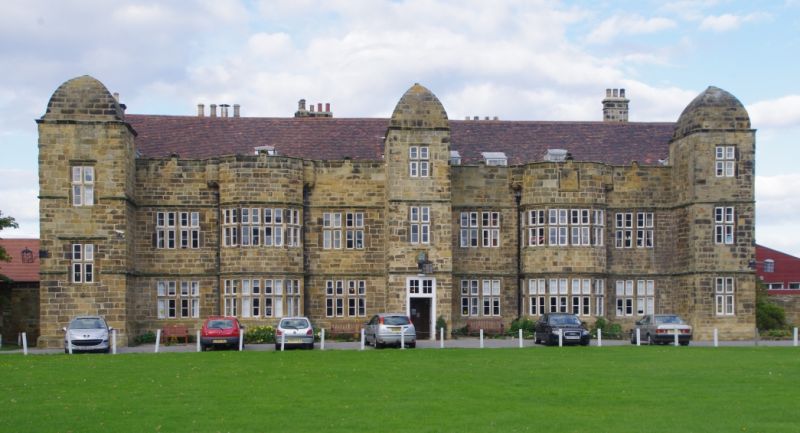 Country house, now Cheshire Foundation nursing home. 1625 with
late C19 alterations, for Sir William Pennyman. Additions and
alterations from 1963 for the Cheshire Foundation.
MATERIALS: coursed squared stone with plinth, quoins and
ashlar dressings; roof of plain tiles except for towers, which
have stone roofs.
PLAN: E-plan.
EXTERIOR: 2 storeys with 3-storey towers; 9-bay range,
arranged 1:3:1:3:1; symmetrical except for wider left tower.
End and central towers project, and linking sections have
central full-height canted bay windows. All windows stone with
chamfered surrounds, mullions and transoms.
Central boarded door in plain reveals and stone lintel, with
glazing bars in mullioned 2-light overlight. 2-light windows
above door, on 3 floors in right tower, in left tower 2
windows; link sections have 4-light window flanking bays of 12
lights, arranged 2:2:4:2:2. Cyma recta hood strings except in
left tower where fenestration breaks through-floor levels; on
left returns of central and left towers where there are none.
High roof has parapet with carved putti corbels to projections
between small raised segments over windows between towers;
convex pyramidal roof to central and right towers; left has
ogival eaves to similar roof.
Single dormer behind each canted bay and 2 in bay to right of
door, all with flat heads. Stepped chimneys at right eaves, at
rear of main roof and on rear ranges.
Left return has restored 2-light ground-floor window towards
front, a 2-light window towards rear of first floor and
2-light mullioned attic windows, the lower lights wider and
the upper blocked, to front of centre of gable peak.
Right return has massive chimney stack, a second projection of
unknown purpose and mullioned and later windows, the latter in
rebuilt section.
Rear shows single storey kitchen was extended and raised to 2
storeys, probably late C19. Carved arms of Pennyman impaling