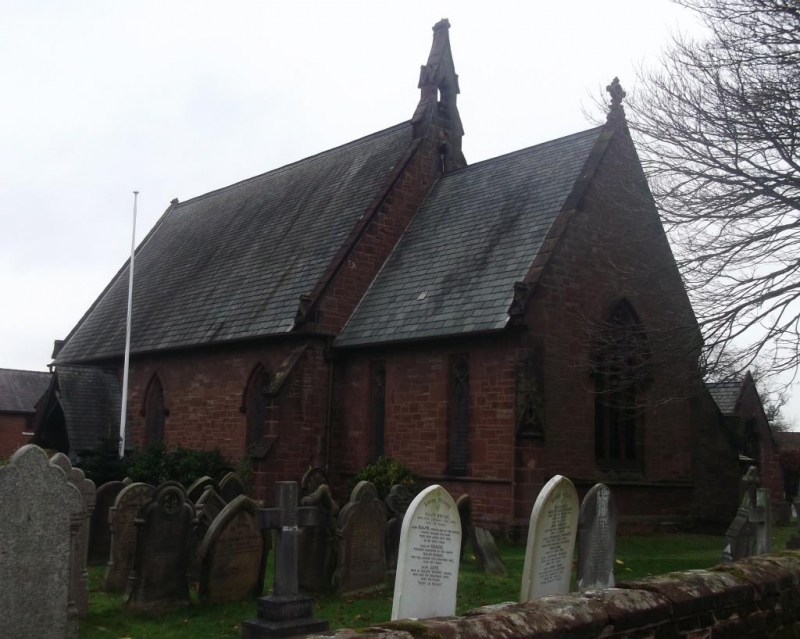 Parish church. 1854; north aisle added in 1926. Church by
Fulljames & Walker; north aisle by B Miller. Tooled red Bunter
sandstone in squared coursed rubble with ashlar dressings and
timber and stone porch; green Westmoreland slate roofs with
coped gables.
PLAN: 2-bay chancel; 4-bay nave with north aisle, south porch
and east bellcote.
EXTERIOR: nave and chancel on plinths; diagonal buttresses to
chancel; angle and diagonal buttresses to nave. East window is
of 3 trefoiled lights with quatrefoil tracery in the head.
Chancel windows are single trefoil-headed lights beneath
quatrefoil tracery set in moulded rectangular surrounds.
South porch is steeply gabled and scissor braced at the front:
south door is boarded with strap hinges. Nave windows are 2
centred and have 2 trefoil-headed lights beneath trefoil
tracery.
The north aisle and vestry additions have gabled windows with
mullions, carved as angels and the clerestory windows are
trefoils.
West window is of 4 lights with octofoil and mouchette tracery
in the head. Moulded sill string beneath windows which
generally have hoodmoulds with fruit ball stops.
Chancel has wheel cross on the gable; bellcote is gabled with
single pointed opening.
INTERIOR: oak panelling flanks the panelled reredos and is
fixed to the sanctuary side walls.
Arch-braced chancel roof with exposed rafters and ashlars. Two
large and one small arch separate the north aisle from the
nave. The roof is arch-braced supported by elaborate corbels
which consist of shafts which rise from deep clusters of
vines. The rafters are exposed with ashlars as in the case of
the chancel.
Oak altar has 3 panels with trefoil motif. Altar rail with
shield decoration, front of choir stalls with fruit motif
attached to linenfold fronted reading desk. 1929 pulpit has a
simple Gothic motif. Octagonal font with oak and metal strap
banded cover.
Stained glass by Wailes and Kempe in east window and chancel.