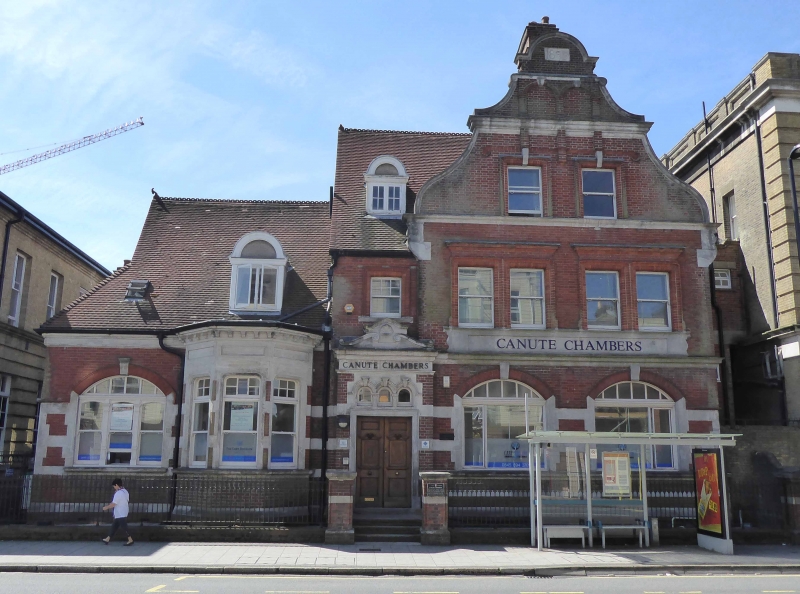 Offices of shipping company. Built in 1893 for the American Line. Flemish bond red brick with Portland stone dressings. Clay plain tile roof, gabled and half-hipped. Brick axial stacks. PLAN: Rectangular on plan, cross-gabled to right [W] and with central entrance. Queen Anne/Dutch Renaissance style. EXTERIOR: 2 storeys and attic. Asymmetrical north front with large 2-bay Dutch gable on right in five stages with semi-circular pediment, datestone 1893, cornices, blind arcading and first and second floor windows with moulded brick architraves with keystones and cornices; stone frieze below second floor windows inscribed Canute Chambers. Large ground floor windows have cambered arches with keystones and frames within with cornices, the left window retaining its sashes with pilasters; large canted bay window to left of centre with modillion cornice and central porch with scrolled pediment, arcaded overlight and double doors with scrolled pediments to centre panels. Lower eaves on left with dormers above with
semi-circular pediments. Similar, but simpler, rear [S] elevation. INTERIOR not inspected. NOTE: Canute Chambers was built for the American Line. In 1907 it was occupied by the Great White Star Line, and in 1931 it was taken over by the United States Line, which occupied the offices until 1969.