Church of All Souls 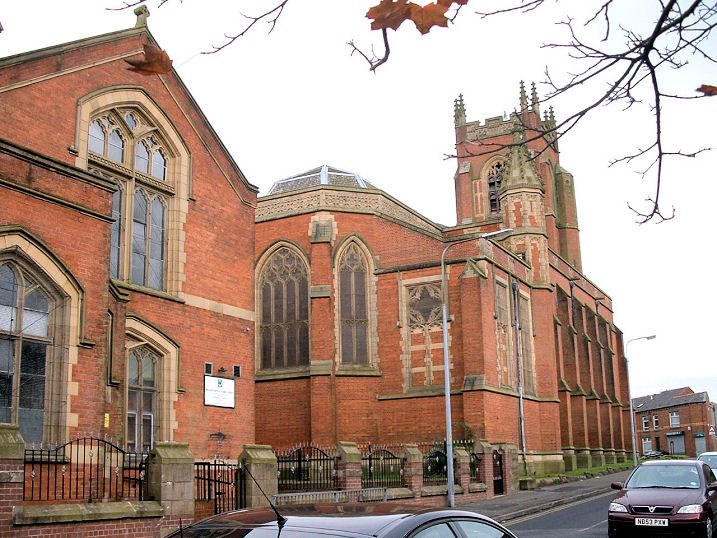 Entry Name: Church of All Souls

BOLTON,
ASTLEY STREET (South side),
Church of All Souls

INTERIOR: a wide single space, with complex boarded roof with rib vaulting forming arcades, and king-post trusses across the main span. The windows, which are recessed behind a continuous sill, are separated by semi-octagonal shafts which carry the vaulting. High tower arch, and blind arches each side, with quatrefoil windows set high up. Chancel arch with flanking side arches, the chancel itself arcaded by 2 bays each side to organ chamber and side chapel/vestry, and octagonal wall shafts each side of main chancel arch, carrying tie beam of roof. Integral pulpit in main arch, octagonal with traceried wood panels on stone base with wrought-iron rail. Stone reredos with traceried panels, the outer panels inscribed with prayers etc. Ornate case to organ, in chamber to north of chancel. Choir stalls and other furniture possibly original, including canopied stalls against west wall of nave. Windows throughout have geometrical glazing, with some mosaic stained glass in west windows, and stained glass in east windows. Chancel east window possibly by Hardman, using a medieval idiom. Windows each side of chancel employ a renaissance style. Splayed octagonal font with wooden canopy added in 1923, beneath tower; a war memorial of enriched marble tablet mounted on north wall.
(BOE: Pevsner N: South Lancashire: Harmondsworth: 1969-).