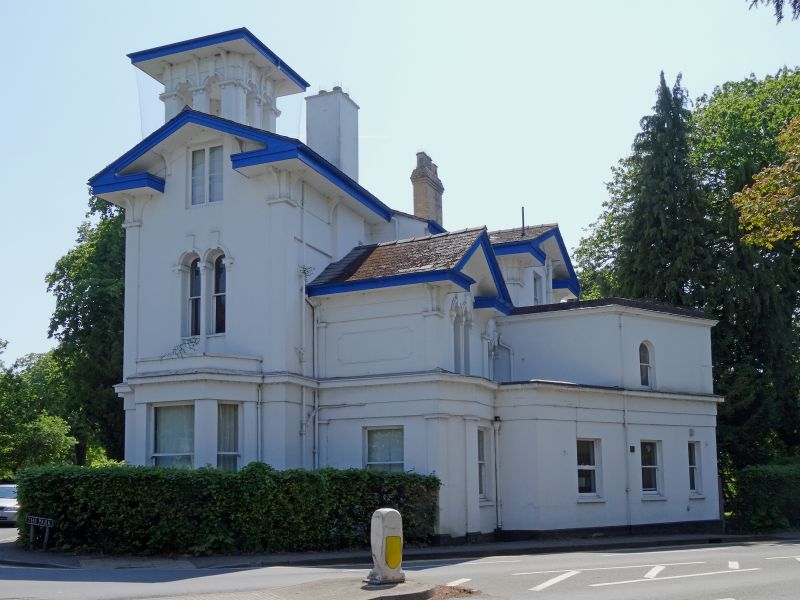 Villa. c1839-50. Architect SW Daukes. Stucco over brick with
slate roof; tall brick and stucco ridge stacks with cornices;
iron balcony. Italianate style. Irregular plan, approx
T-shaped with further ranges and tower.
EXTERIOR: 2 storeys with attic to right and gabled range to
front, with 4-storey tower-porch to angle. Stucco detailing
includes horizontal rustication to ground floor, left return;
moulded first-floor band, imposts and keystones to
round-arched windows. Mainly 1/1 sashes. Entrance to base of
tower a 6-fielded-panel door; to left a round-arched window;
tower has pairs of round-arched windows to first floor with
cross-shaped lights above; wide eaves on brackets; upper stage
has 2 round-arched openings to each side, with keystones and
imposts. Broken pedimented gabled range to right has 2
round-arched first-floor windows and canted bay with casement
windows to ground floor; casement to attic. Left return a
similarly broken-pedimented gabled range has two 1/1 sashes to
ground floor, 2 round-arched windows to first floor. Similar
gabled range to right return with infill to ground floor at
right. Wide eaves on brackets.
INTERIOR: many original features remain including central
dogleg staircase with oak balustrade with lion's paw to newel;
joinery includes shutters to windows and panelled doors. Some
fireplaces. Plasterwork includes deep coving and cornices.
SUBSIDIARY FEATURES: balcony to tower has U-motif.
HISTORICAL NOTE: The Park had been laid out by 1833 by its
owner Thomas Billings as an oval tree-lined drive with a
central park which for a short period in the mid-C19 became a
zoological garden. In 1839 the development was bought by
Samuel Daukes who continued the building. One of the principal
developments influenced by White's and Nash's schemes for
Regent's Park in London (1809-11). Cornerways is reputed to
have been built as the zoo-keeper's house and an eyecatcher