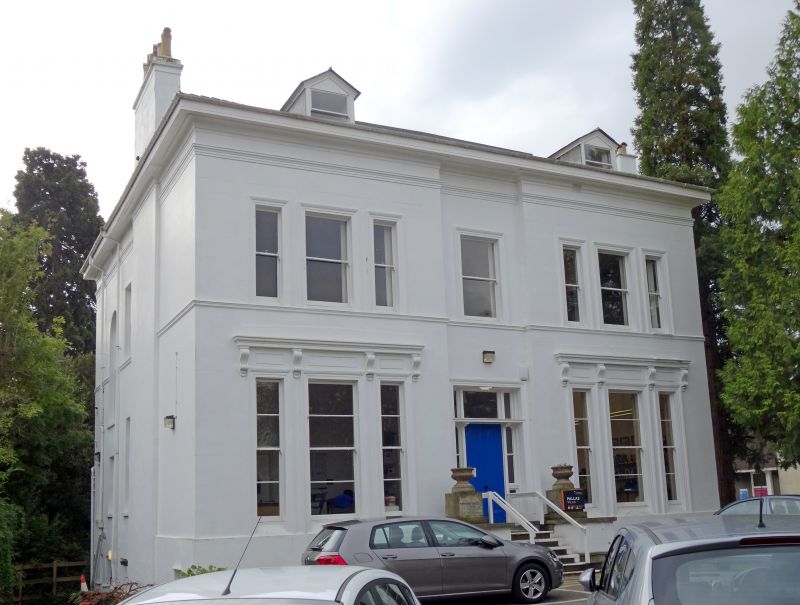 Villa, now college building. c1833-50. Stucco over brick with
hipped slate roof, stucco end stacks.
EXTERIOR: 2 storeys with attics, 3 first-floor windows. Double
depth plan with central hallway and rear, left staircase.
Outer bays break forwards. Moulded first-floor sill band.
Windows have tooled architraves, those to ground floor have
wide cornices on consoles. Outer bays have triple windows;
first floor has 1/1 sashes; ground floor has 2/2
horizontal-pane sashes. Central entrance: flight of steps to
2-rounded-panel door with sidelights and overlight and
pilastered architrave. Gabled roof dormers have 1/1 sashes. To
left return a round-arched staircase window with 2/2
round-arched, horizontal-pane sash with margin-lights.
INTERIOR: retains original plasterwork and joinery. Narrow
open-well staircase with rod-on-lotus balusters; rooms to
right have deep coving with lattice motif; hall has acanthus
modillions and fleurons. Tooled architraves to 4-panel doors.
HISTORICAL NOTE: previously known as 'Easton Grey', in 1939
Pallas House was used by Cheltenham Ladies' College as
temporary wartime accommodation, and in 1946 it was purchased
by St Mary's College. The Park had been laid out by 1833 by
its owner Thomas Billings as an oval, tree-lined drive with a
central park which, for a short period in the mid-C19, became
a zoological garden. In 1839 the development was bought by
Samuel Daukes who continued the building. This is one of the
principal developments influenced by White's and Nash's for
Regent's Park (1809-11), London.
Noted by Sampsom for retention of its 'particularly rich
interior decoration'.
(Sampson A: Historic Buildings of Cheltenham and Gloucester
College of HE; Girouard M: The English Town: 1990-: 270-271;
Merrett HS: Plan of the Town of Cheltenham: 1834-; Sampson A
and Blake S: A Cheltenham Companion: Cheltenham: 1993-:
36,92).