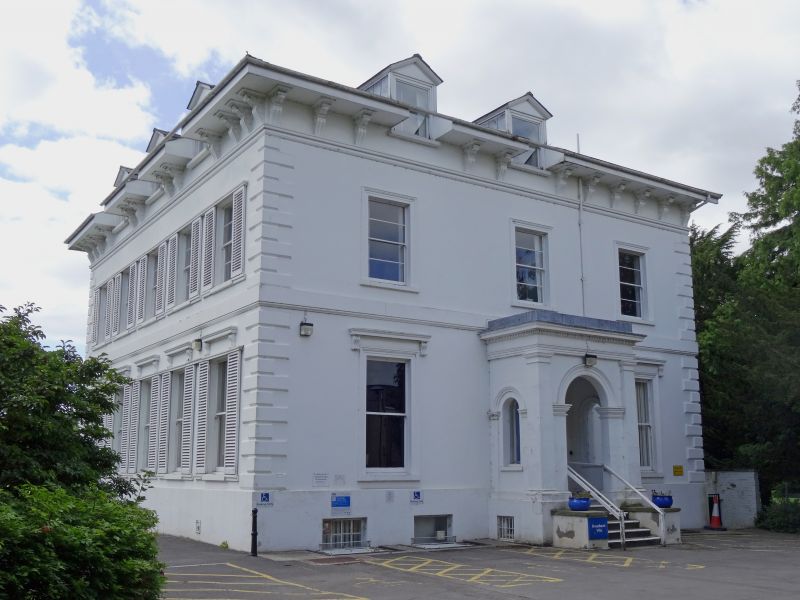 Villa, now college. c1833-60. Stucco over brick with hipped
slate roof.
EXTERIOR: 2 storeys on basement with attic, 3 first-floor
windows. Stucco detailing throughout includes plinth, quoins
to angles, moulded first-floor band, moulded frieze;
ground-floor windows have cornice on console brackets; to
front facade, windows have tooled architraves. Central
entrance, flight of 6 roll-edged steps to 4-panel door (upper
round-arched fielded panels), with round-arched sidelights and
cambered overlight with margin-lights and coloured glass,
within solid porch with round-arched opening on imposts with
tooled arch to head, Doric pilasters to angles, tooled frieze
and dentil cornice, blocking course; round-arched windows to
sides. 2/2 sashes where original. Wide eaves on brackets.
Gabled attic dormers interrupt eaves and have 1/1 sashes.
Returns and rear have 5 first-floor windows. 2/2 sashes to
first floor and 1/1 sashes to ground floor. Blind boxes and
louvred shutters remain to rear and to left return.
Conservatory to rear interrupts 3 ground-floor windows.
INTERIOR: retains contemporary fittings including: open-well
staircase with iron balusters with ornate scrolled balusters
and wreathed handrail; ceiling cornices and roses, shutters,
etc. Painted Egyptian frieze in hall now partly covered by
paper.
HISTORICAL NOTE: The Park had been laid out by 1833 by its
owner Thomas Billings as an oval tree-lined drive with a
central park which for a short period in the mid-C19 became a
zoological garden. In 1839 the development was bought by
Samuel Daukes who continued the building. This is one of the
principal developments influenced by White's and Nash's design
for Regent's Park in London (1809-11). Until 1895 Broadlands
House was known as Fulwood House. Its C19 owners included Genl
C Fuller of the Royal Regiment of Artillery, and Surgeon Major
J Newton of the Indian Medical Service. During the Second