Church of St Augustine of Canterbury

A Grade II Listed Building in Tonge with the Haulgh, Bolton 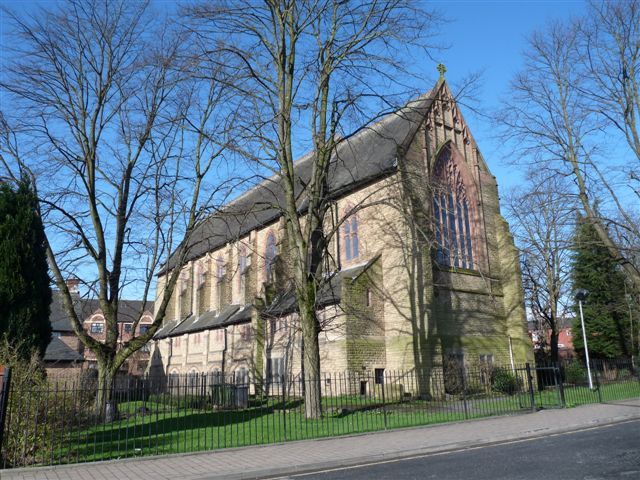 Includes: Church of St Augustine of Canterbury AINSWORTH LANE.
Parish church. 1883-1886 by R Knill Freeman. Rock faced red
sandstone with ashlar dressings and graded slate roof.
EXTERIOR AND PLAN: raised over a basement which incorporates
the vestry: Nave with lean-to aisles, asymmetrical full-
height gabled porch and baptistery to north-west. Chancel of
less height, its roof swept down over organ chamber to the
north.
Asymmetrical gabled wing to west forms porch and baptistery,
with doorway to right in arch with fleuron to hoodmould and
2-light square headed window above, below lower sweep of roof.
Traceried baptistery window to left of the doorway, with
fleuron to hoodmould and Perpendicular traceried window above,
blind but for 2 small lancet lights. Continuation of aisle
wraps round western angle of church.
Central buttress to west wall, with low 3-light window and
4-tier 2-light window above on each side. Small paired foiled
lights to aisles (4-bays to north, 5 to south), and stepped
3-light windows with relieving arches over to basement.
Buttresses above the aisle divide the clerestory, which has
tall 2-light windows with reticulated tracery. Full-height
vestry extension to north, under continuation of chancel roof.
Canted angle with oriel window to first floor, the roof
continued over the angle and carried on timber bracket.
Lean-to aisle each side of chancel, forming vestry and chapels.
2-light windows north and south in chancel, and large 5-light
east window, flanked by projecting ribs which form a frame
above the window for rich Perpendicular blind traceried
panelling.
INTERIOR: raw brick with stone dressings, the brickwork
plastered in chancel only. High 6-bay nave with low and narrow
aisles and clerestory. Chancel flanked by vestry and chapel.
Gallery occupies western bay of nave, with Lady Chapel below
now screened off.
Baptistery in adjacent bay to north, with high arcade arch.
Arcade with plain chamfered responds and moulded arches, with
2-light window above forming a high clerestory divided by
pilasters sprung from corbels between each arcade arch.
Steep roof with cusped principal rafters and collar.
Narrow lean-to aisles, structurally divided by buttresses cut
by arches. Banded brick and stone chancel arch, with bands of
traceried panelling at the level of the springing of the arch.
Chancel raised up steps (and formerly divided from the nave by
a screen); 2-bay arcade each side, opening to side
chapel.
Organ loft over stairs to north, with painted panelling. High
reredos to altar, renaissance style, with gilding. Sedilia to
north with fleurons to hoodmould, and piscina to south. Keeled
chancel ceiling.
Chapel to south of chancel with early C20 triptych as war
memorial reredos.
East window by Henry Holiday, as WW I memorial; figures of
saints, mainly early C20, in aisles. Font in north-west
baptistery, a plain cylindrical basin with low reliefs and
gilded painted lettering.
(BOE: Pevsner N: South Lancashire: Harmondsworth: 1969-).