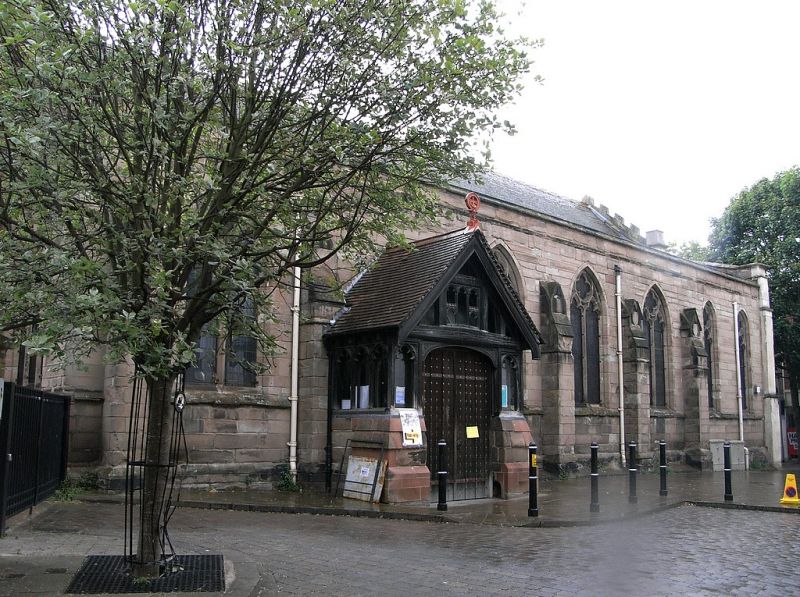 EXTERIOR: Three-stage west tower rebuilt in 1820-1, probably by John Collingwood; five-bay nave; two-bay chancel; full length aisles to either side; concealed roof. Gothic revival character. The nave has two-light windows, and an entrance on the south side in the second bay, with a studded planked door in four-centred surround with two orders of hollow chamfer. This is set within a stone (much restored) and traceried-timber porch, part of Aston Webb's work. Single light windows to chancel with Decorated-type tracery to heads, and an east end with five-light window by Preedy between three-light windows by Aston Webb with Decorated-type tracery. Buttresses to ends and centre have quatrefoil embellishment; embattled gable end. The tower has a pointed planked door to the lowest stage; second stage with blind oculus; and third stage with two ogee-light belfry openings.

INTERIOR: The earliest surviving masonry is probably in the north chancel aisle, which was built to house a chantry in 1288. The south chancel aisle was also added in the C13. The remainder of the church was rebuilt in the Perpendicular style c1450. The present spacious appearance of the interior was created in the C15 when the arcading of slender pillars and pointed arches and a new tower were built. The timbers of the nave roof date mainly from this period as do the inner doors in the south doorway. The positions of former altars at the east end of the north and south aisles, are shown by surviving aumbries and piscinas. The church was refitted in 1836, and most furnishings were removed at the time it was converted to a record office. Among what survives is an alabaster reredos of 1867 by Preedy. C17, C18 and C19 memorial tablets, including several removed here from St Michael's when that church was demolished. High quality monument to Alderman John Nash (d.1662) with reclining figure set in aedicule with twisted columns to open pediment; restored monument to Dud Dudley (d.1684), ironmaster and royalist general; and monument to Anne Fleet (d.1600) with five kneeling figures in Elizabethan dress. Late C19 font in Perpendicular style. Bells sold for scrap 1951.

HISTORY: A major research project by Nigel Baker and Richard Holt on urbanism and the church in Worcester and Gloucester in the Middle Ages enormously developed our understanding of, inter alia, St Helen's history. It is now clear that before the establishment of the Anglo-Saxon see of Worcester c675, St Helen's was the main church in its region, and a Roman or sub-Roman origin is not impossible, part of the evidence being the dedication, to Helen, mother of the Emperor Constantine (ibid., esp. pp.197-200). Thus the site has great potential archaeological significance and potential to set alongside its importance as the city's richest medieval parish churches. Norman stonework found during the late C19 restoration indicates a large stone church by the C12. After the great fire in the city in 1113, the then rector, Fritheric, gave all his tithes towards the repair of the church. The lack of early fabric reflects the church's wealth in the Middle Ages, and the various phases of rebuilding at that time. The church was in a very poor condition in 1879 prior to a major restoration by Aston Webb. In the mid C20 it became redundant, and was subsequently leased to Worcestershire County Council and used 1957-2002 as the County Record Office. In 2005 it reverted to the parish of All Saints' and is now (2008) in occasional use for worship.

REASONS FOR DESIGNATION DECISION: St Helen's is listed at Grade II* for the following principal reasons:
* As one of Worcester's wealthiest medieval parish churches whose fabric is largely of this era including a number of architecturally elaborate features.
* For its fixtures and fittings, including a fine monument to John Nash, d.1662.
* For its historic interest and archaeological significance; it was the main church in its region before the Anglo-Saxon see of Worcester was founded c675, and a Roman or sub-Roman origin is not impossible.