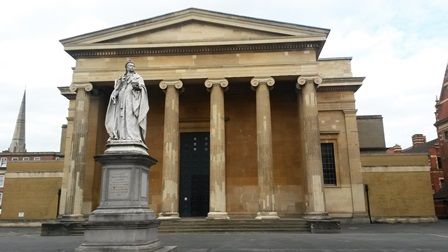 Statue of Queen Victoria on plinth. 1887. Signed to rear right
angle of plinth: T BROCK SCULP RA LONDON. Grey granite plinth
and white marble statue. Stepped base to plinth surmounted by
statue of Queen, standing, in robes of state and carrying orb
and sceptre. Inscribed on plinth: This state of / Queen
Victoria / was erected / by her loyal subjects / of the county
of Worcester / in commemoration of / the completion of 50
years / of Her Majesty's happy reign / 1887.
HISTORICAL NOTE: Thomas Brock was one of the leading sculptors
of public statues of the period and as responsible for the
Victoria Memorial, The Mall, London (1901-24). During the C18
Foregate Street was known as 'the mall' and Tymbs' Worcester
Guide of 1802 notes, 'the Foregate Street itself, by being
well paved and sufficiently broad to admit a full circulation
of air seems to be generally resorted to as a fashionable
promenade.'
The Shire Hall, Statue of Queen Victoria, City Museum and
Library and Nos 15, 19, 22, 23, 24, 28, Nos 33-46
(consecutive) and No.49, Foregate Street (qqv) form a
significant group.
(Worcestershire Historical Society Occasional Papers:
Whitehead D: Urban Renewal and Suburban Growth: The Shaping of
Georgian Worcester: 1989-: 12; Tymbs: Worcester Guide:
Worcester: 1802-: 60).