Anglican Church of All Saints 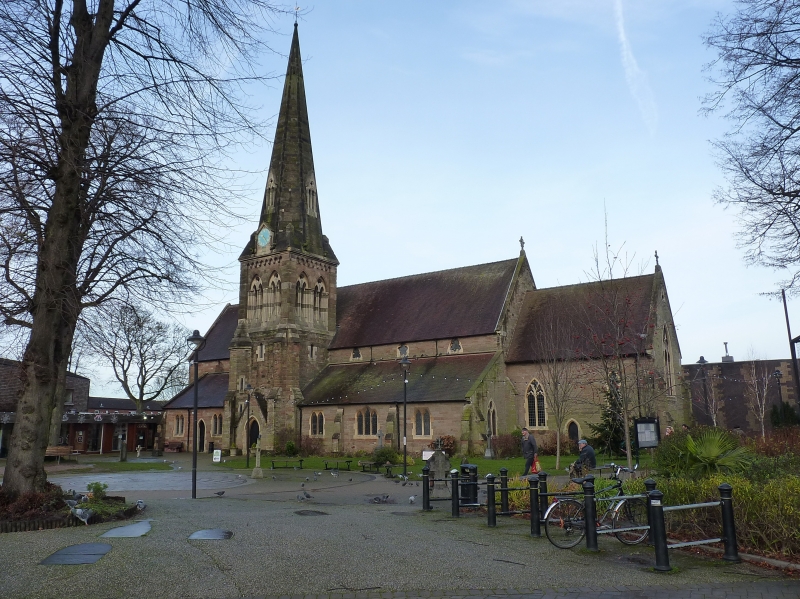 MATERIALS: The walls are constructed from brick with Bromsgrove stone cladding, under plain clay tile roofs.

PLAN: The plan has a chancel with north organ chamber, choir vestry and boiler room, and a five-bay nave, with north and south aisles. There is a Lady Chapel at the east end of the south aisle. The south-west tower houses the present entrance. The north aisle contains a projecting main entrance (not used) and the baptistery is situated in the west end of the church. The westernmost bay of the nave and aisles is divided from the body of the church by a modern screen, beyond which the vestries have been converted to office space.

EXTERIOR: The exterior is eight bays long, and is arranged around an off-centre tower, above the entrance. To the left of the tower, at ground floor level, are the former vestries. The ground floor entrance is framed by buttresses and the tower stair, which is built into the south-west corner of the tower. A Gothic-arched entrance projects forward as a sharp gable, with coping on the parapet. The tower is in three stages: a deep base with buttresses; a belfry section, rich in detail; and a tall broach spire. Detail is most concentrated on the belfry, with its clustered colonnettes dying into a deeply splayed base picked out in a lighter stone. The clustered colonnettes support coupled Gothic arches, with recessed plate tracery, with quatrefoils. The broach spire has gabled dormers, or openings, also in a lighter stone. To the right of the tower is the south aisle, of three bays with buttresses supporting a low roof. Deeply recessed beyond the aisle is the chancel, with a plain elevation of two window bays and a central door.

INTERIOR: The nave has north and south arcades of pointed arches on octagonal piers. The arches and piers are picked out in alternating bands of reddish and cream stone, with the wall elevations plastered. The piers have simple moulded capitals. The roof is an exposed arched-braced construction, with alternating arched braces resting on carved stone corbels and all braces rising to collars. The aisles are of a lean-to construction, with exposed timber roofing, and wainscoting on the walls. The east end of the south aisle has a Lady Chapel. The carved wood pulpit, with ogival arch motif on facets, sits on a carved stone base with engaged colonnettes. The church's foundation stone is housed at the back of the pulpit, which is accessed by an integrated stone stair. The chancel arch is supported on engaged columns with naturalistically-carved capitals and adjacent headstops. The rood screen wrought-ironwork is of some complexity. The north side of chancel has a screen of coupled Gothic arches springing from a freestanding central pier, with a naturalistically-carved capital - a feature repeated on the engaged piers to either side. The deep relief capitals in this section of the church have fine and crisply-realised detail. A reredos dating from 1892 features wainscoting and much ornament such as crocketing over miniature ogival arches. The south wall of the chancel is wainscoted. The servers' vestry has original very deep cupboards.

HISTORY: The railway arrived in King's Heath in 1840, resulting in gradual development of the area from that date onwards. In 1857 Frederick Preedy was chosen to design a low-budget church for the burgeoning area. The builder, Isaac Clulee, managed to pare down the quotation to £1,945.10.0. Building began in early 1859 and the church was consecrated in July 1860. The church was contemporaneously described as being 'in the early decorated style' and was intended to be extended as to when funds became available. A new parish for All Saints was created out of part of the parishes of St Nicolas, King's Norton and St Mary, Moseley, in 1863. In 1866, the spire was added at a cost of about £1,200 and in 1883 the north aisle was added by Julius Alfred Chatwin. In 1892, a new reredos was erected and in 1899 the church was enlarged at the west end to the designs of J P Sharp & Co., Architects of Martineau Street, Birmingham. At the time of inspection (February 2009), the church was being extended to the west, to connect it to the newly-built church centre at the east of the plot in which the church stands.

REASONS FOR DESIGNATION: The Anglican Church of All Saints, King's Heath, is designated at Grade II, for the following principal reasons:
* The church is a pleasing asymmetrical design of 1857 by the recognised C19 architect, Frederick Preedy
* The exterior shows impressive massing, and demonstrates good detailing, showing a high degree of quality in design and execution
* Its interior has good-quality stonework and interesting roof structures, complemented by high-quality, crisp carving
* Preedy's church is enhanced by additions by J A Chatwin and J P Sharp, which create a cohesive and handsome ensemble