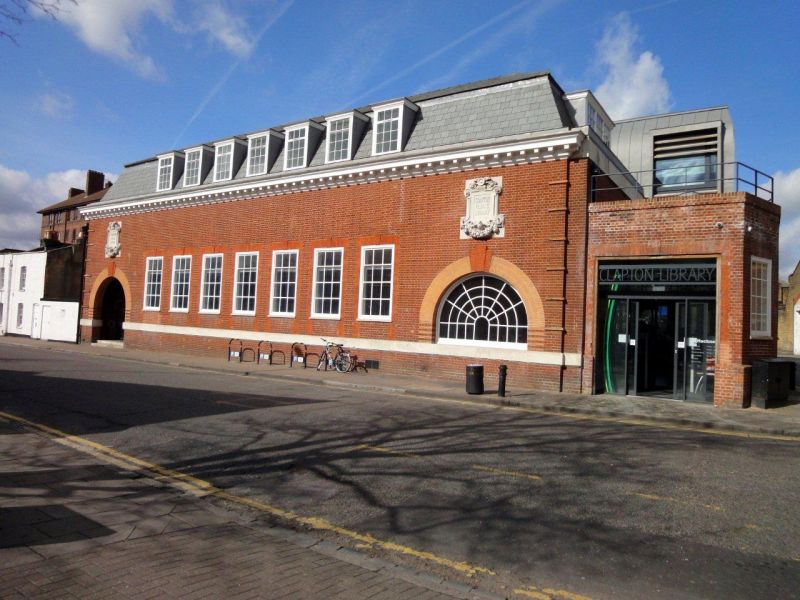 II
Public Library. 1913-14 by Edwin Cooper, FRIBA. Red brick, mansard roof of Cumberland slates. A long, rectangular building, one and a half storeys.
EXTERIOR: Two arched openings, the western containing the entrance, the eastern a window with rubbed brick keystones and tilework surrounds. Above each opening is a stone scrolled cartouche with festoon inscribed CLAPTON PUBLIC LIBRARY and with owl. Stone string course at plinth height below 7-window range in centre, each window of 12 panes with hinged upper sections set within surrounds of gauged red brick. Prominent eaves cornice.
INTERIOR: includes a bronze dedication plaque in entrance hall commemorating the library's opening on 14 January 1914. Tuscan pilasters to reading rooms on ground floor. Children's library on first floor is barrel-vaulted, with issue desk at west end looking down into stairwell.
HISTORY: Hackney adopted the Public Libraries Act in 1903, and built three libraries to designs by Edwin Cooper a decade later-Dalston (demolished), Homerton (q.v.) and Clapton. The library was funded by Andrew Carnegie, the industrialist and philanthropist who financed 2800 libraries worldwide by 1919. Planned central tower not executed.
SOURCES: The Builder, 17 October 1913. Elizabeth Robinson, C20 Buildings of Hackney (Hackney Society, 1999).

Included as one of three libraries in Hackney (c.f. Homerton, q.v.) designed by Sir Edwin Cooper in a restrained Classical style, with excellent use of materials, and funded by Andrew Carnegie.