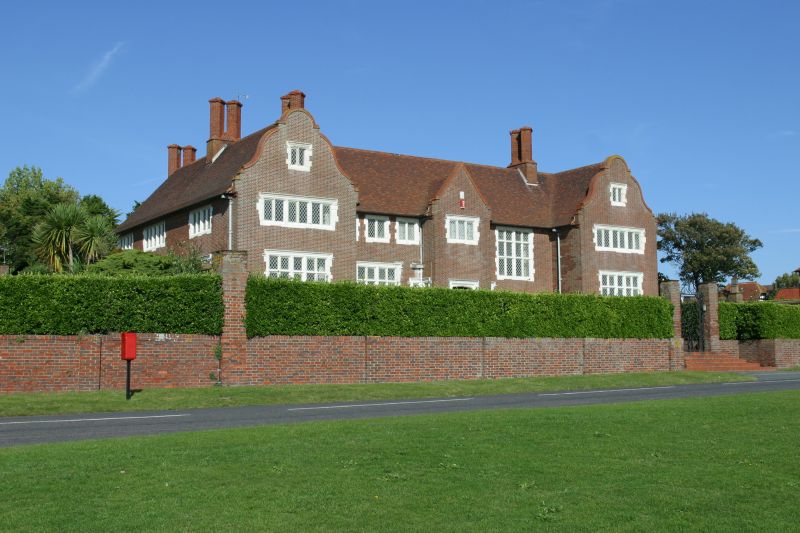 Large detached house in grounds, including attached garages, workshops and garden house, boundary and garden walls, gatepiers, gates and terrace walls. Built in 1927 by Samuel Harrington Evans, assistant to Sir Edwin Lutyens, for Howard Paget, founder of the Dorking Brick Company, and owner of a Derby porcelain factory which later became part of Royal Crown Derby. The builder was J.T. May and Son. Gardens were designed by the garden architect Percy Cane (1881-1976). Arts and Crafts influence in Jacobean style with Dutch gables. Built of two and a half inch bricks made by the Dorking Brick Company, with stone mullioned or mullioned and transomed windows with leaded lights and tiled roof with several brick chimneystacks set diagonally. H-shaped plan. Two storeys and attics with irregular fenestration, five bays to front.

EXTERIOR: front elevation facing south-east has a central projecting gabled two-storey porch with four-centred arched doorway below with oak-panelled door, projecting end bays with curved gables with two-light windows to the attic, six-light window to the first floor and five-light mullioned and transomed window to the ground floor. The penultimate bay to the right has a large three tier staircase window. The penultimate bay to the left has three casements to the first floor and four-light mullioned and transomed and transomed window to the ground floor. The south-western elevation has three mullioned windows to the first floor of four, five and four lights respectively, two four-light windows to the ground floor, the right window mullioned and transomed, and two central arched entrances to a formerly open loggia now enclosed with later C20 glazed doors. The north-eastern elevation, which comprised the service end to the western side, has a series of mullioned windows. The north-west elevation has a recessed centre and deeply projecting wings enclosing a courtyard with low brick wall and square piers with three brick steps, brick paved courtyard and rectangular stone pond. This links to three terrace walls with brick steps. Also attached to the house are original brick garages and workshop, now with C20 shutterfronted doors, a garden room and store and brick boundary walls about six feet high with pilasters at regular intervals. In front of the house the wall is about three feet in height with six brick piers including central two either side of a decorative wrought iron gate with the name of the house, overthrow and five steps. The front garden is enclosed with a higher brick wall with a round-headed entrance to the left side and a section of wall to the north-west includes an elaborate wrought iron gate with scrollwork.

INTERIOR: vestibule opens into a central ground floor corridor with Jacobean style oak plank and muntin panelling about six feet high with moulded plate cornice, decorative radiator panels, panelled doors with S-shaped iron hinges and an oak well staircase with moulded wooden balusters and a square newel post with moulded finial. The Dining Room to the south west has similar panelling and radiator panels and a four-centred stone fireplace with brick fireback. The service wing to the north west retains the oak service staircase with stick balusters and newel post with domed cap and servants' bells. The Scullery and Kitchen retain original wooden cupboards and a small Sitting Room has a brick fireplace. To the left of the front door the Study retains the original brick fireplace. The Lounge to the south east has a large original brick fireplace with pilasters and a plate cornice. The Music Room has three large square chrome lights, possibly original, but the fireplace has been removed and a mirror feature inserted in its place. The first floor retains all original brick fireplaces to the bedrooms with a chrome surround to the one in Bedroom 3, an original gas fire to Bedroom 4 and large built-in cupboard to Bedroom 6. The Master Bedrooom, no 1, has a large dressing room built in one corner and the adjoining bathroom is lined in green and white Vitrolite and has original fittings. There is also a large purpose-built airing cupboard.

HISTORY: The house was named to commemorate an experience the owner had at sea, when his boat was lost in a storm, but was eventually saved by the presence of the Seven Stones Lightship, moored between Land's End and the Isles of Scilly. A weathervane within the grounds, thought to have been made for the Pagets, depicts the Seven Stones Lightship. A remarkably intact late Arts and Crafts house in Jacobean style.