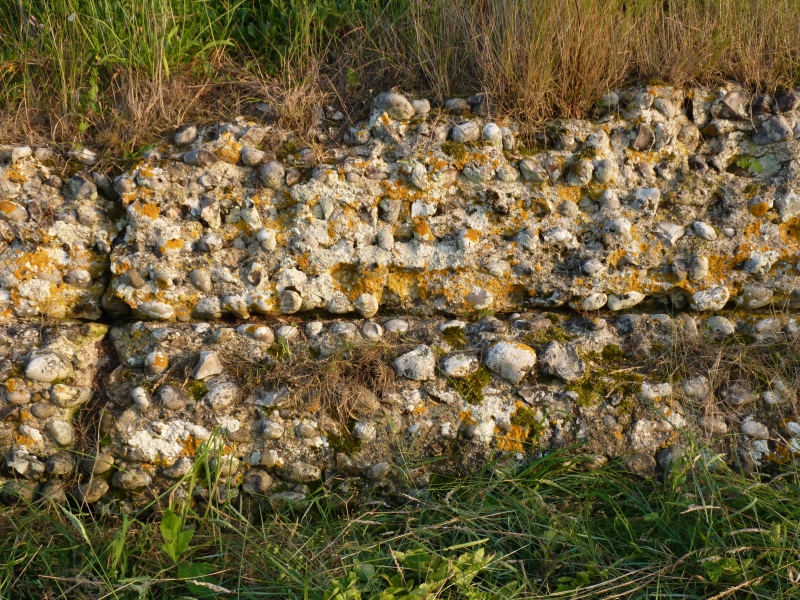 II
Retaining wall, probably a former quay. Probably early C17 (1649 terminus ante quem). Whole flints with some erratics and occasional highly fired bricks; some white knapped flint with galleting to western end. Extremely hard mortar perhaps indicating an effective pozzolanic additive. About 40 metres long with a small return at right angles at its western end. Some of the facing above ground has fallen to reveal mortar rich corework with a marked lift line. Rear face obscured by land which is retained by it. The returned west end is of neatly knapped and galletted flintwork. The return is of the depth of a buttress and has an off-set forming a plinth. The angle between the wall and the return is filled with an oblique fillet of masonry.
HISTORY. 1649 is a 'terminus ante quem' for this very unusual wall because it is indicated on Hunt's map of Salthouse of 1648 and 1649. Here the wall, the water channel leading to it across the marsh from the sea, and the piece of marsh in front of it are all indicated as belonging to 'Andrew'. It is specifically named Andrew's Wall, the length of it is indicated and it is the only structure shown for a considerable distance around. It is very probably a surviving quay and concerned with shipping and commerce from an early period on this stretch of the north Norfolk coast.