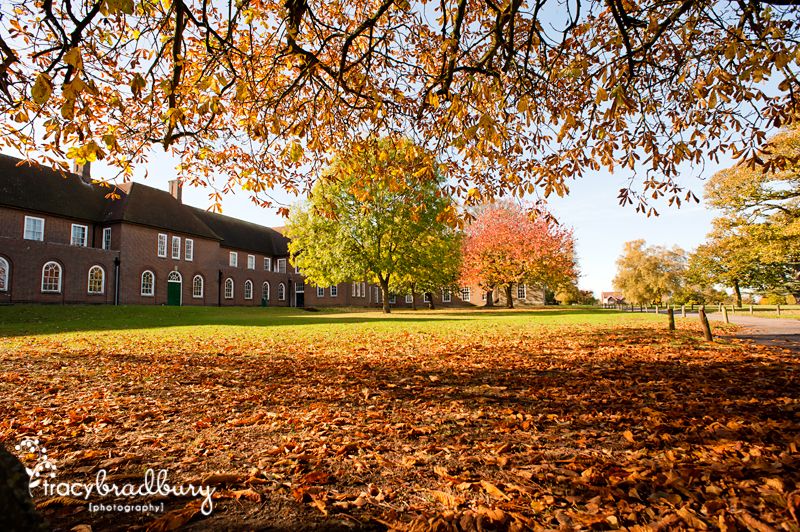 CHAPEL: Advanced porch has shallow steps and 4 tall Doric columns below large pediment filled with the school coat of arms, influenced by that of the Foundling Hospital, with 2 women flanking a plaque that incorporates a baby, a lamb and 'HELP'. Behind this, stone face with pilasters, central door and flanking windows. Brick walls continue to each side forming the front range that has parapet with urns flanking pediment and tall hipped roof. To centre, a tall open tower comprising plinth with clock capped with urns and corner piers surmounted by elongated copper dome. To each side of this a single storey double colonnade of 4 stone columns connecting to classroom ranges and incorporating drive through to courtyard. Main Chapel range behind is sparer with stone eaves, brick quoins and lower apse to rear. Windows have brick architraves and mostly rounded arch heads. Lower narrow ranges to sides with secondary doors within stone architraves. Foundation stone on outside wall. INTERIOR: Stone lined entrance has memorial to Thomas Coram (1668-1751) in niche transferred from original Chapel. Wide nave of 6 bays terminating in apse, with shallow aisles to each side. Stone lined with pilasters defining each bay from which spring ribs for barrel vaulted ceiling. Wood panelled gallery supported on wood columns and with re-used C18 pews from original Chapel. Stained glass windows include several re-used from original Chapel. Flying curved dogleg stair in rear corner with alternating stick and zig-zag iron balusters and stone monuments on the walls leads to crypt. Ashlar arcade with quoins leads to central space that incorporates numerous C18 and C19 memorials transferred from the C18 Chapel, many referencing tombs in the St. Georges, Bloomsbury churchyard that was near the original Chapel. Bust of G.F. Handel. Apsidal end includes re-used ornate iron Communion Rail from original Chapel.

CLASSROOM RANGES: Linked by a colonnade to each side of Chapel are 2 long ranges of 2-storeys and 17 bays with 6-over-6 pane sash windows, stone plinth, brick quoins, brick parapet and steep hipped roof and end chimneystacks. To central 3 bays, slightly advanced entrance with 4 stone pilasters, central door within stone architrave with urns, parapet with central plaque and flanking urns, pair of ridge chimneystacks. Return elevations to Chapel have high circular windows over colonnade. Return elevations to outside have stepped stone architrave, a stone plaque to left range, and sash windows. Projecting to the rear from the centre of these ranges are 2 long 2-storey ranges forming the sides of the courtyard. These have a spine corridor to rear where the ground floor windows are under round brick arches. Facing courtyard, the central 3 bays are slightly advanced with stone pilasters and scrolled stone pediment over central window with keyblock plaques including infant motif. At both sides, a long single storey double colonnade of stone columns links to the front of the Main Block. To rear at each side is another classroom range parallel to that at the front and linking to the Main Block, enclosing the courtyard.

MAIN BLOCK: Front range is of 2-storeys under steep hipped roof with central tall cupola similar to that on Chapel. 5 bays wide with single window bay to each end, the 3 central bays recessed behind colonnade of stone columns, continuous stone cornice and frieze, brick parapet with tall end chimneystacks, stone balustrade with corner urns over central 3 bays. Recessed entrance has stone architrave with broken segmental pediment within which foliate swags and figurative plaque, architrave extends to include sash window above. 6-over-9 sashes to ground floor and 6-over-6 sashes to first floor. Flanking lower ranges with sash windows and 2-storey classroom range connects to rear. INTERIOR: Entrance hall has Deco style stepped wood architraves. Stairs to right are re-used from the Girl's Wing of original Foundling Hospital and heavy square plan newels, wide moulded handrail and short vase balusters. Board Room at first floor is believed to have wooden fireplace surround. Assembly Hall has dado wood panelling and raised ceiling along spine in shallow elliptical arch, gallery over entrance and stage to opposite end with the school's coat of arms above, stained glass incorporates re-used windows from original Chapel. Behind this, the Dining Hall of 2 identical sides with central folding wood partitions formerly separating girls from boys, dado panelling below paned windows, shallow tray ceiling with glazing. To left, Swimming Pool is intact with raised segmental arch clerestory roof. To right, Gymnasium, with raised lantern ceiling. Kitchen continues to rear. Extending from the back of the rear Classroom range are 2 long single storey ranges of bicycle sheds with brick end and rear walls and wooden column colonnade of 10 bays.

HISTORY: In the early-C18, Captain Thomas Coram had campaigned to establish a charity that would care for the high numbers of abandoned babies in London. His work resulted in a 1739 Royal Charter that established the London Foundling Hospital for the 'Maintenance and Education of Exposed and Deserted Young Children'. Designs for the hospital were made without charge by Theodore Jacobsen in an restrained Georgian style as a three sided courtyard. The institution would serve 400 children with emphasis on the teaching of crafts; girls were expected to go into domestic service, boys into apprenticeships. The institution flourished from the mid-C18 through the C19 caring for many abandoned foundlings, but by the early-C20 increasing amounts of pollution and changing ideals about the benefits of cleaner air in the country encouraged the Foundling Hospital to look for a new site. The building in Lamb's Conduit Fields was sold in 1925 and soon after Jacobsen's hospital was demolished; only the southern colonnaded range and the pedestal for Thomas Coram's statue survived. The interiors of the three principal rooms, which had been decorated to a much greater degree than the austere children's rooms, were reconstructed within the Grade II London Headquarters in Brunswick Square (q.v.), and some materials were salvaged for use in the new school buildings.

The Ashlyns site in Berkhamsted was purchased in 1929, chosen for its proximity to London and the railway, the sufficient acreage and its good land. The architect John Mortimer Sheppard was selected to design the new school buildings. While also looking to contemporary school design, the school was intended to reflect the original hospital both in spirit and in detail. The original Arms designed by Hogarth were the model for the new arms, the main staircase from the Girl's Wing was re-erected, columns were to match an original from the old building, and busts of musicians were to be installed in the new band room. In addition, the original light pedestals were sited on the new drive and twenty boundary posts with a lamb motif, modelled on the originals, were stationed at the edges of the estate. The most extensive and extraordinary incorporation of material from the original hospital was in the new Chapel. Here are the earliest original stained glass windows and some of the original seating including the 'Governor's pews'. The Crypt was built to hold the remains of Thomas Coram, the Communion Rail, numerous memorial tablets and the bust of Handel. Coram's remains were removed to St. Andrew's Holborn after the School was sold to Hertfordshire County Council in the 1950s, but the rest of the historical artefacts survive.

Ashlyns's School has special interest as a fine Neo-Georgian style school complex of 1932-5 by John Mortimer Sheppard, organised around a central courtyard with the Chapel most prominent, it also has a very special historic interest for its associations with the famous 1745 Foundling Hospital in London, now demolished, but which was partly incorporated into the new school building.