A Grade II Listed Building in Idle and Thackley, Bradford 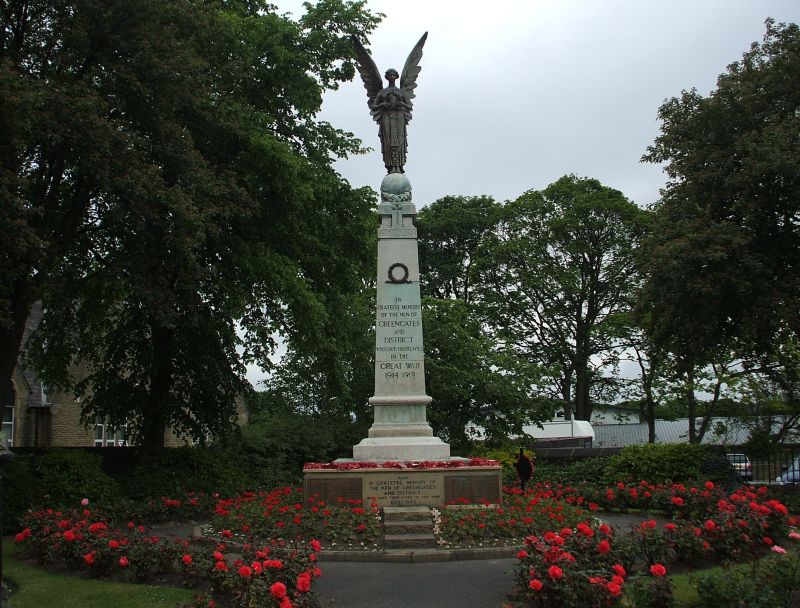 II
First World War Memorial, erected in 1921, designed and executed by E Wright of Greengates and L F Roslyn of South Kensington, London. It consists of a square column in white Portland stone with a carved top on a stepped sandstone base, surmounted by a winged figure in bronze. The leading face bears an incised inscription "IN GRATEFUL MEMORY OF THE MEN OF GREENGATES AND DISTRICT WHO GAVE THEIR LIVES IN THE GREAT WAR 1914-1919", with a bronze laurel wreath above. On the three other sides are bronze-coloured plaques with 80 names. On the base is another incised inscription "ALSO IN GRATEFUL MEMORY OF THE MEN OF GREENGATES AND DISTRICT WHO GAVE THEIR LIVES IN THE WAR 1939-1945", flanked by two metal plaques with 28 names. A further name is added to the right. Near the top of the column is inscribed (one word on each side) Honour, Freedom, Peace, Justice, and above these are two incised Latin crosses on the leading and rear faces. Near the base of the column is a frieze of stylised leaves. On top of the column is a stone ball surrounded by a laurel wreath. Standing on the ball is a bronze statue of a female winged figure holding a laurel wreath, possibly representing 'peace gained through sacrifice' (contemporary reports), or Athene.
The memorial is set in a flower bed with various associated commemorative items around it, including two triangular stones with metal plaques commemorating royal visits in 1923 and 1928. The whole is in a small memorial garden on one corner of the crossroads.
The sculptor Roslyn is credited with a similar bronze sculpture at Calverley and another at Wetherby as well as others further afield. The two nearby sculptures are more clearly of Athene Nike.
This is a fine example of a large war memorial surmounted by a fine bronze sculpture of a winged Victory.