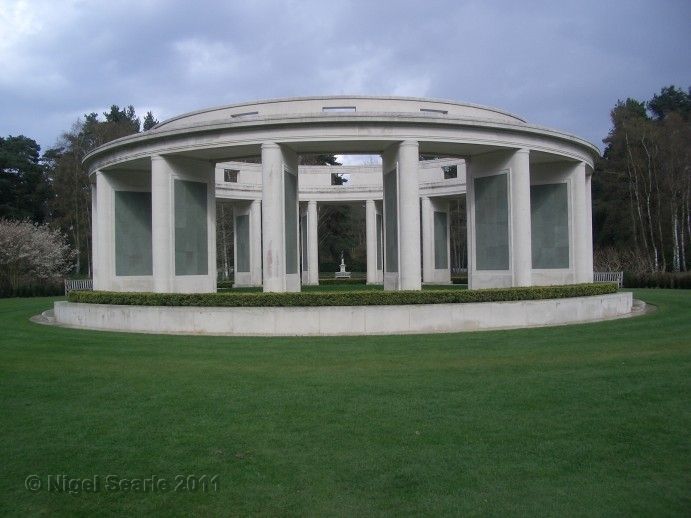 GV II
War memorial. 1958, probably by Sir Edwin Maufe. Portland stone, slate inscription panels. The memorial comprises an open circular structure. The outer ring, raised up on a dwarf wall with clipped hedge behind, is carried on slender piers with rounded ends, each side of which carries inscription panels. These carry an entablature, behind which is a taller wall pierced with rectangular openings. In the centre is a round grass lawn. Opposite the principal steps is a screen of masonry, carrying an inscription to the 3,500 men and women of the forces of the Commonwealth, 'to whom fortune and war denied a known and honoured grave'.
HISTORY: this memorial to missing servicemen and women was inaugurated following a service attended by HM the Queen on 25 October 1958. It forms one of a sequence of distinguished military memorials at Brookwood from the First and Second World Wars: no other cemetery in Britain has such a collection. The persons commemorated include Violette Szabo GC, the Special Operations Executive agent who was executed at Ravensbruck concentration camp in 1945. Maufe (who was knighted for his services as architect to the Commonwealth War Graves Commission in 1954) was architect of the memorial at Runnymede to missing airmen of the RAF, of 1953; his chapel at Brookwood was built in 1947. This memorial is listed for its historic interest; for its architectural quality; and for its important visual role in this outstanding landscape of military commemoration.