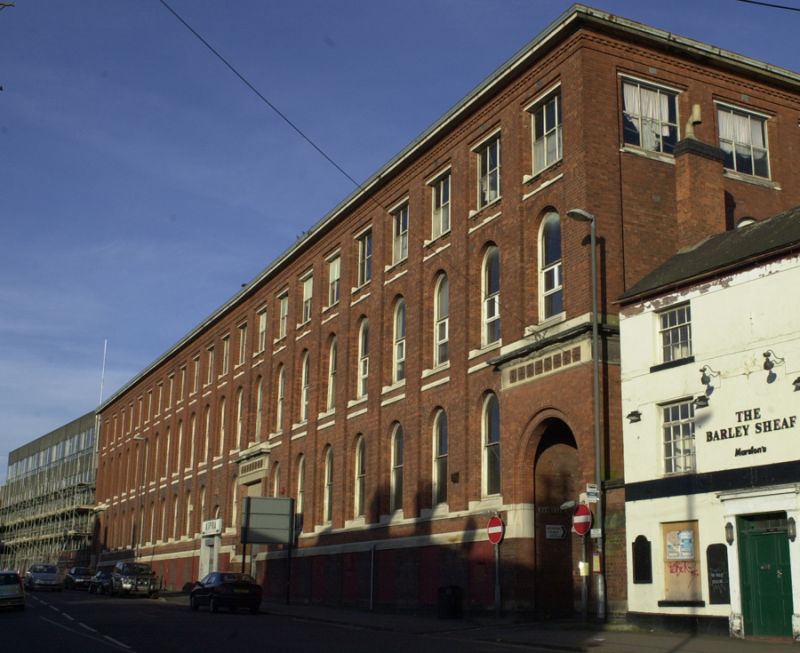 EXTERIOR: Lower Bond Street façade: three storeys plus basement; red facing bricks with ashlar dressings. 22 window range, with window bays set back in a palazzo-style façade; segmental headed openings to the basement windows, round-arched openings with roll moulds to the second and third-floors, square-headed steel lintels to openings on the top floor with dentil frieze beneath the sills. The extent of the original nine bay building at the south end of the range is marked by the chimney stack and the two cart entrances with decorative terracotta foliate detailing above. Both entrances originally had round-arched openings of two orders with roll-mouldings, as survives on the south entrance into Baines Lane; the arch in the north entrance has been squared off. A further cart entrance is located in the northern bay of the 1910 extension, also with two orders of arches with roll mouldings (the arch survives but a window has been inserted and the entrance has been bricked up). The plainer return range along Baines Lane is of three storeys plus a basement with 11 bays of segmental arched windows with glazing bar casements. The rear wall on east side of this range opposite the chapel has no windows. To the rear, in the angle between the Baines Lane and Lower Bond Street ranges is a stair block, extended c.1910 to accommodate a lift shaft. There is a courtyard between the extended L-shaped Goddard building and the later C20 concrete framed building to the rear, itself a replacement of an earlier factory range which formed part of the Atkins concern. The ground-floor of this later factory incorporates a boiler room with segmental arched heads and brickwork contemporary with the 1910 extension of the factory.

INTERIOR: The factory ranges have wooden floors and cross beams with tie rods, carried on cast iron columns. The roof over the 1870s building is original and is of composite truss construction, with timber raking struts and cast iron knees between collar and principal rafters. There are iron rods in addition to timber purlins. The roof construction over the 1910 extension is broadly similar. The introduction of powered manufacturing through line shafting is evidenced by end bearing blocks in the walls and by holes drilled in the iron columns and cross beams which indicate the former position of carriers.
History:
The hosiery industry was well established in Leicestershire, Nottinghamshire and east Derbyshire by the end of the 17th century. The stocking frame was introduced to Hinckley in the mid-17th century and by 1791 nearly 1,000 frames were in use, with framework knitting becoming a full-time domestic employment. Hosiery was to become the principal industry in Hinckley up until the 1970s. Hosiery was the latest of all of the textile industries to become fully factory based, a process which continued throughout the 1880s and 1890s. The Atkins factory is one of the earliest surviving representatives of the transition in hosiery from domestic hand-powered to factory machine-powered production. Although the factory is located in the medieval town, it is also part of the Druid Quarter, a northwards expansion of the town devoted to hosiery manufacture in the late 19th and 20th centuries.

The origins of the Atkins Brothers' firm can be traced back to 1722, when Robert Atkins (1702-1768), the son of a yeoman farmer, returned to Bond Street in Hinckley to make stockings, having served his apprenticeship in London. At this time knitting was a cottage industry with supplies of wool readily available in the locality. The family home was originally located on the site of the 1910 extension of the Atkins building, close to the Great Meeting chapel, built in 1722 (listed at Grade II*). The family were closely linked with the chapel, which was their place of worship, indeed, the original Goddard building was designed with an arched entry which gives access to the chapel from Baines Lane. The family tomb is in the grounds and Elizabeth, the last member of the family to be buried there in 1891, was reputed to have been the driving force behind the expansion of the factory, which included the purchase of an orchard from the Unitarians to provide further land. The family was noted for its philanthropy and interest in public affairs. John (1829-1908), Thomas (1832-1911) and Hugh (1838-1911) were founder-members of the cottage hospital in Hinckley and the library was presented to the town by the family in memory of Arthur (1840-1882). Originally a partnership, in 1929 Atkins was converted to a private limited company and in 1950 became a public company. An important fashion change took place within the trade in the 1960s with the almost total elimination of fully-fashioned stockings which caused redundancies, but the firm prospered again with the introduction of tights.

Until 1990 Atkins was still engaged in essentially the same business and was reputedly the oldest surviving independent knitting firm in the world. A significant feature of the firm was the continuity of the family management, the final member of the family in the firm, Tom Atkins retired in 1994. In the following year the firm, then in its 273rd year, passed into the ownership of Coats Viyella Plc.

Sources:
Atkins of Hinckley 1722-1972
Brandwood, G and Cherry, M, Men of Property: The Goddards and Six Generations of Architecture,1990
Eaton, M, Buildings of the Machine Lace and Hosiery Industries of the East Midlands 1820-1940, 1997, unpublished report
knittingtogether.co.uk: The Heritage of the East Midlands Knitting Industry, website

Summary of Importance:
A large hosiery factory built in two phases: 1875-1878, by Goddard and Paget, 1910 extension by Goddard and Company to the same design, resulting in an impressive and detailed facade unusual for the hosiery industry. It is an intact and early representative of the transfer between domestic hand-powered and factory machine-powered production, this change in scale illustrated by the physical dominance of the factory over the adjacent listed framework knitters cottage. The historic importance of the connection with Atkins Brothers, a firm based on the same site since the C17 and the strong family association with the Grade II* listed Unitarian Chapel, situated so close to the factory adds to the significance of the building.