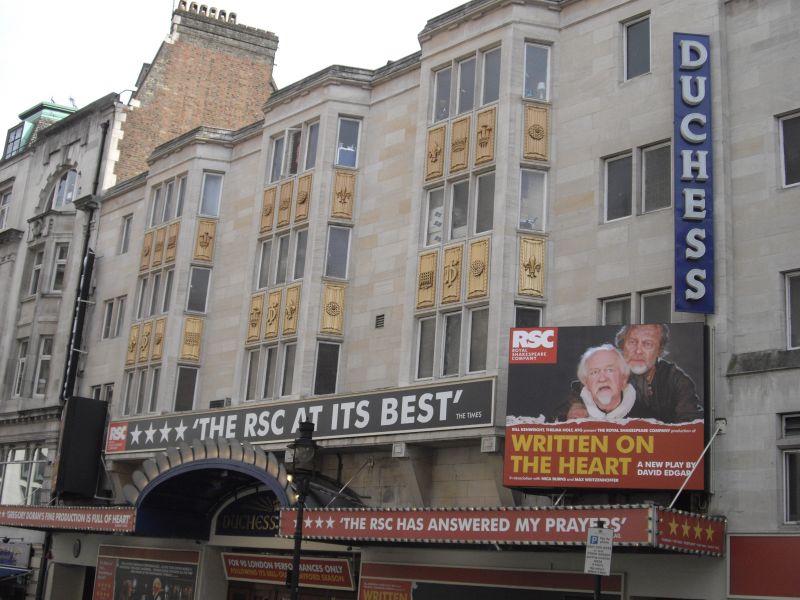 Theatre. 1928-9 to the designs of Ewen Barr for Arthur Gibbons. Interios by Marc Henri and Laverdet. Neo-Tudor style. Steel framed building clad in horizontal stone panels to street frontage; roof not seen. A low parapet runs across the entire faÎade. Three central canted bays supported on console brackets, with cast panels decorated with the Tudor Rose, portcullis, Fleur de Lys, Prince of Wales feathers and carved initials for DT set between Crittall casement windows. They are linked by a large plinth that serves as a band for carrying signage. Long canopy across the entire faÎade is raised in centre over tympanum carrying the theatre's name under crown and sunburst motif by Arnold Auerbach, and three pairs of double timber doors. Pairs of windows in bays to either side over emergency circle exits.

Interior. Main doors lead to tiny entrance hall, which retains cornice details and some timber lining; ceiling laylight obscured. Stairs to left lead down to the stalls and up to private boxes; those to right lead through small crush bar to circle. Slightly octagonal crush bar in former foyer also with laylight (disused), cornices, and with moulded plasterwork to walls. Octagonal motif repeated in wall mirror. Stalls corridors lined in stippled plasterwork, foyer area with fluted cornice and laylights complete with grid of metal kames. Tall, narrow, double-height auditorium with single balcony. Ceiling with saucer dome and dentil frieze; private boxes at the rear (an unusual feature), those to left accessed only from the separate stair. Side walls with lattice window motif either side of tripartite recess set behind fluted baseless piers in antis over side exits. The recesses originally had low reliefs by Arnold Auerbach. Balustrade and seat ends survive from 1929. The stalls simpler, but with lattice-patterned laylights under the balcony. The anteproscenium has bronze relief decorative panels to either side of stage, now normally concealed, by Maurice Lambert, added at the behest of Mary Wyndham Lewis, wife of J B Priestley. The narrow stage reflects the limited space and the specialism in domestic drama for which it was devised.

The Duchess Theatre compares well with other London theatres of the years around 1930 already listed grade II, and is of a style not found or which does not survive outside the capital. It is relatively little altered, with most of its original decoration inside and out surviving, and testifying to the expertise of Henri and Laverdet, specialists in theatre decoration. The panels by Maurice Lambert are of particularly good quality, but it is as an ensemble that the Duchess succeeds, rather like the Cambridge (LB Camden) and Whitehall (City of Westminster), both of 1930 and listed grade II. The planning of this theatre, with all its exits having to be on a single facade is a surprising and remarkable achievement of clarity and concision.