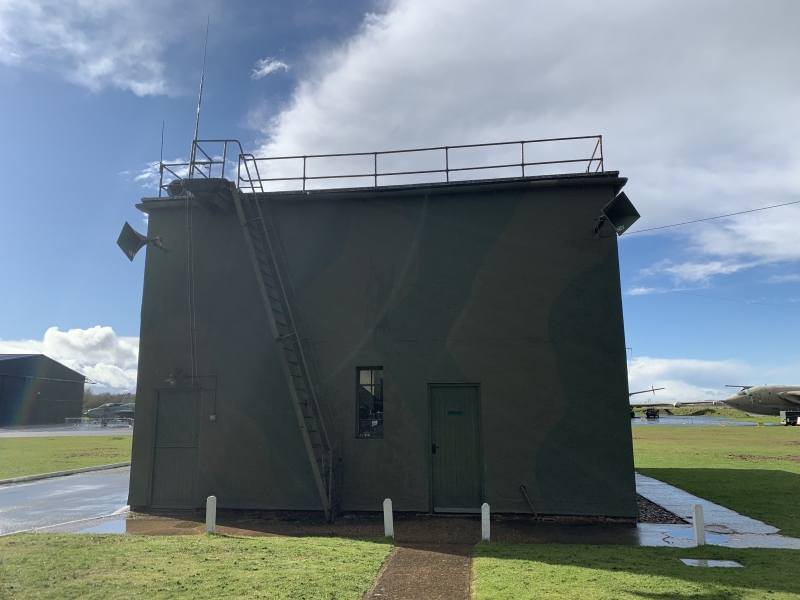 Control Tower. 1942. Built to designs of the Air Ministry's Directorate of Works and Buildings, as Night-Fighter Stations Watch Office. Drawing nos. 12096/41, FCW 4514, 16560/41. Rendered brick with asphalt roof.
PLAN: ground floor has watch office to front with duty pilot's rest room, meteorological office and lavatories to rear; first floor has control room to front, with controller's rest room and signals office to rear, opening onto passage with access to stairs.
EXTERIOR: large multi-paned steel casements to front and to flank walls of watch office and control room, providing clear views of the flying field, these having been reduced in size later in the war (to design 343/43). Access from steel stairs on return elevation to concrete balcony with tubular steel railings and with iron columns providing support. Smaller steel casements to rear part of side and rear elevations. Doors to left-hand and rear elevations.
INTERIOR: concrete stairs; painted brick walls with rendered dados; original joinery including panelled doors throughout.

HISTORY: The Control Tower is one of a very small number of WWII control towers which have survived in this degree of preservation. Designed for night fighter stations, it was also built on a few stations planned as satellite bomber airfields.

Opened in October 1942, with two runways on the airfield, the Halifaxes of Elvington were heavily engaged in the Battle of the Ruhr in early 1943. May and June 1944 saw the formation of two heavy bomber squadrons of the Free French Air Force (serving under the RAF), which made their first attacks on the 5th of June near the invasion beaches of Normandy.

In the second half of the 1930s, increasing attention was being given to the dispersal and shelter of aircraft from attack, ensuring serviceable landing and take-off areas, and the control of movement: the result was the development of the control tower and the planning from 1938 of the first airfields with runways and perimeter tracks. The control tower, which first appeared as a recognisable design in 1934, became the most distinctive and instantly recognisable building associated with military airfields, particularly in the Second World War when they served as foci for base personnel as they awaited the return of aircraft from operations. This is one of a very small number of control towers on Second World War airfields which are either exceptionally well-preserved or have distinguished operational histories. Their iconic value both as operational nerve centres and as memorials to the enormous losses sustained by American and Commonwealth forces in the course of the Strategic Bomber Offensive has long been recognised. A deserted control tower, for example, was the focus of the opening scenes of Richard Asquith's film The Way to the Stars (1945), which explored the thoughts of a veteran returning to a deserted airbase, as a ploughshare pulled by a horse team returned land formerly used to wage aggressive war to agriculture.