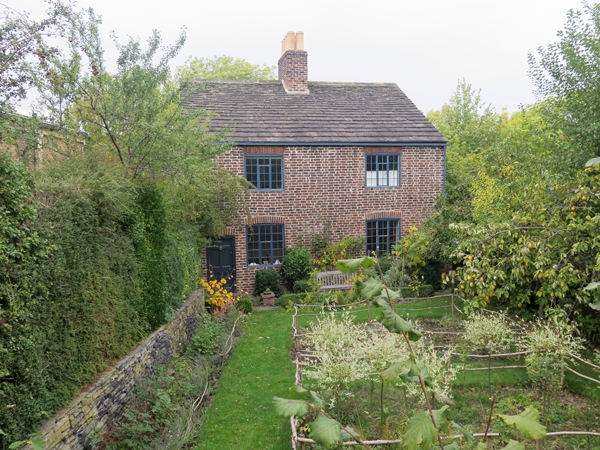 II
Workers' houses. Early C19. Handmade bricks with coursed, squared rubble stone plinth and stone slate roof.
PLAN: Rectangular plan, with through cottage to left (No.212) and two back-to-back cottages built against the party wall (No.210).
EXTERIOR: Two storeys over cellars with attic rooms. Two bays wide. Double pitched roof with single, central ridge stack with eight flues. Front elevation has two windows to ground and first floors. Windows have camber arches of soldier bricks, no sills, and are taller to the ground floor. Original three-light fixed casements with small pane glazing and smaller openings with strap hinges. Upper windows have decorative wooden shutters. Front door of No.212 to left has stone sill and camber arch of soldier bricks. Later door inserted to right. East gable elevation has two original doorways to two cottages in No.210, both now blocked. Rear elevation has two cellar windows in stone plinth, similar windows to front elevation, but lost glazing bars, and upper right window replaced with modern window. Rear door of No.212 as front, with steps up.
INTERIOR: The through cottage has two rooms on the ground and first floors, an attic room and a brick barrel-vaulted cellar. The two back-to back cottages each have half the brick barrel-vaulted cellar, a single room on the ground and first floors, but the front cottage has the whole of the attic room. Features of note include stone flag floors and original floorboards, timber staircases with kite winders, six and four fielded-panel doors, planked doors, moulded architraves, and a number of original fireplaces.
SUBSIDIARY FEATURES: Original dry-stone walling to property boundaries and within garden, steps down to Porter Brook to rear.
HISTORY: The property lies on land rented and subsequently acquired by the Wilson family from Earl Fitzwilliam of Wentworth Woodhouse, and was probably built by them to accommodate their workers. The Wilsons owned the nearby water-powered Sharrow Snuff Mills (Grade II*) and the steam powered Westbrook Snuff Mills (Grade II) on Sharrow Vale Road. The headrace for the snuff mills' dam is fed from the Porter Brook and runs through a culvert approximately three metres from the rear of Nos. 210-212.

SUMMARY OF IMPORTANCE: Nos.210-212 Sharrow Vale Road is of special architectural interest as a rare and little-altered example of early C19 industrial housing which was proto-industrial in that it anticipated the plan form and constructional detail of the mass industrial housing which was soon to transform the area, as well as reflecting local vernacular building traditions based on the use of stone for walling, dressings and roof coverings.
The industrial expansion of the C19 English economy saw a parallel expansion in mass building of workers' houses. In this context, therefore, this dwelling type, originally located in a rural rather than urban setting, is a significant survival. The property was associated with the Wilson family, whose Grade II* Sharrow Snuff Mills lies nearby to the east, powered by the Porter Brook, which runs to the rear with the culverted headrace to the mill running directly behind the building.
In a national context, Nos. 210-212 Sharrow Vale Road is of special interest as a rare surviving example of a modest dwelling type representative of the watershed period when rural and urban forms of workers housing were developed, and from which mass urban housing types, such as back to back, court and terraced dwellings were to develop. This well-preserved building, with its distinctive plan form and close association with two nearby listed snuff mills, meets the national criteria for listing.