The Croft (Adjacent to County Hall) 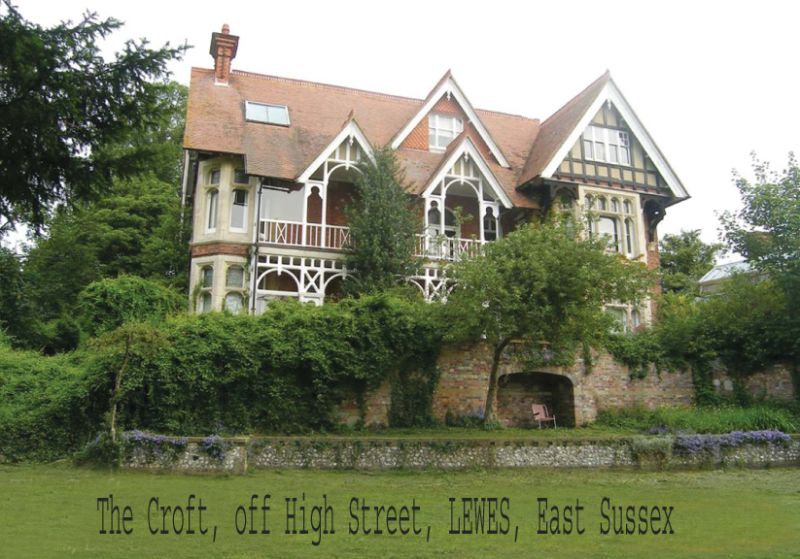 II
Large detached house, later used as offices. Built in 1899 by Samuel Denman, architect of Brighton for John Henry Every.
EXTERIOR: An asymmetrical building of red brick in English bond with stone window dressings and timberframed gables with plastered infill. The tiled roof has tall channelled brick chimneystacks and tiled roofs with terrcotta ridge tiles, windows are mainly mullioned and transomed windows but there are wooden sash windows to the attic floor and entrance front. The entrance front to the north west has a projecting gable, the upper part tile-hung, and an elaborate gabled porch with open balustered sides and curbing stones. One storey service wing to the north east. The south west front has two large gables with carved wooden bargeboards and pendants, the northern one supported on a large carved bracket and two two-storey canted bay windows. The south east or garden front has to the east a large projecting gable with carved bargeboards and pendant supported on large wooden brackets with two-storey canted bay window, and to the south west a large gabled tile-hung dormer, and an elaborate two storeyed wooden verandah with round-headed arches to the ground floor and to the first floor under gabled projections. The ground floor door in the garden front has an unusual wooden latticed screen on pintle hinges. Attached to the south east side is a contemporary conservatory on a brick base retaining cast iron columns and columned staging and pond. Attached to the south west is a brick and stone terrace wall with four central stone balusters over a four-centred arch to a central seat alcove.
INTERIOR: The porch has a mosaic floor and decorative iron grille and a series of good quality stained glass panels with floral designs and brass fingerboards. The main staircase in the entrance hall rises the full height of the house with moulded balusters with Moorish arches, elaborate newel posts, arches supported on baluster-shaped pilasters and a moulded coffered ceiling. Stained glass to many of the ground and first floor windows to the south west have a sunray design to the round-headed fanlights and the French windows leading to the verandah at both levels retain elaborate brass fingerboards. Other principal rooms on the ground and first floors have stained glass windows with floral motifs to the transomes. A ground floor room, probably originally the dining room,has a plastered ceiling, arches with pilasters and the motto "OMNE BONUM DEI DONUM". Doorcases have swansneck pediments and there is a panelled hatch through to the service end. Another corner room also has a cast iron fireplace with with swag and urn decoration and tiled surround to the firegrate. A first floor room has elaborate stained glass windows with a roundel with the Phoenix symbol and an elaborate wooden fireplace with mirrored overmantel with columns and pilasters below. A further room has a cast iron fireplace incorporating an oval mirror to the overmantel, end pilasters and turquoise tiling at the sides of the firegrate. A bathroom retains original green and white wall tiles, floor tiles and an original radiator. The attic floor retains two fireplaces with pilasters and cast iron firegrates. The service staircase with wooden stick balusters and turned newel post with acorn finial remains together with a cambered tiled fireplace and some original built-in wooden cupboards.
HISTORY: The "Croft" was built as a family home for John Henry Every at a cost of £800. A detached motor house was built in 1905 (and is the subject of a separate listing). Every's father John Henry Every, started as an iron founder in Lewes in 1832 and the Phoenix ironworks were built in North Place in 1861. The company produced railings and lamp posts for Sussex streets, oven doors and soor boxes for homes and parts for piers in Brighton, Eastbourne, Bognor and Hastings. John Every Died in 1887. His son John Henry Every was mayor of Lewes from 1903-5 and started the Phoenix Sports Grounds, the Phoenix Instatute which provided baths and recreational facilities for his employees and was responsible for the restoration of Thomas Paine House and Westgate Chapel (both listed). He donated Thomas Paine House to the town.
SUMMARY OF IMPORTANCE: A well-preserved 1899 detached house designed by architect Samuel Denman of Brighton that has special architectural interest manifest in the exterior, with brick and tile-hanging and timberframed gables as well as an elaborate two storey wooden verandah, and also in the interior, which retains an unusually complete interior of the period including stained glass, fireplaces, plastered ceilings down to elaborate fingerboards. The client, John Henry Every, was an important local figure who was the owner of the Phoenix foundry at Lewes, Mayor of Lewes and a local benefactor.

A well-preserved 1899 house in brick and tile-hanging with timberframed gables and elaborate two storey wooden verandah retaining an unusually complete interior of the period including stained glass, fireplaces, plastered ceilings down to elaborate brass fingerboards. The client, John Henry Every, was an important local figure as owner of the Phoenix foundry at Lewes, Mayor and local benefactor.