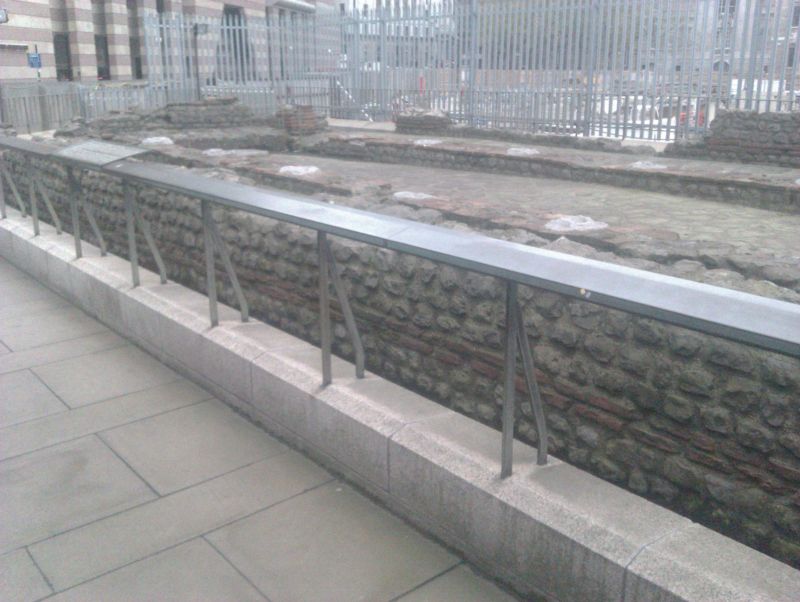 II
Roman Temple dedicated to the worship of Mithras. Constructed circa AD 240-250. Probably dedicated to Bacchus from the early 4th century until falling out of use in the late 4th century.
MATERIALS: Rubble stone walling of Kentish Ragstone with tile banking. Ashlar quoins, column bases, door cill and jambs. The foundations and the first few courses above ground have been re-constructed using modern mortar.
PLAN: Rectangular aisled plan with a projecting apse at the north end. One entrance to the south through a central doorway. The reconstruction is some 6m above and 75m to the north west of its original site. The orientation of the reconstruction also differs from the original where the apse formed the western end of the Mithraeum. The temple as displayed is broadly that of the mid-3rd century.
EXTERIOR: Rubble stone walling with ad hoc tile banding; tile and ashlar quoins. The projecting apse is externally supported by three solid buttresses.
INTERIOR: Raised side aisles separated from the nave by sleeper walls originally surmounted by seven stone columns, the locations of which are indicated by stone bases (not original). Raised dais which would have held the cult statue and Tauroctonos (bull-slaying scene). Stone slab in the floor south of dais (not original). Stone lined square well at the north end of the west aisle.
HISTORY: The Mithraeum was constructed in the mid-3rd century AD, continuing in use until the late 4th century although it had probably been converted to the worship of Bacchus from the early 4th century onwards. It survived as a standing ruin into the Anglo-Saxon period. Rediscovered and excavated by Grimes 1952-1953 as a result of bomb damage clearance in preparation for the redevelopment of the Bucklersbury House site. Partially moved to its present site in 1962 where original fabric was used to form a reconstruction of the Mithraeum. The artefacts from the excavation, including high quality sculpture such as the head of Mithras, are now in the care of the Museum of London.
SUMMARY OF IMPORTANCE:
This structure is the only known Mithraeum from Roman London and one of only a handful discovered in Roman Britain. It was one of the most important and popular archaeological discoveries of the immediate post-War era. Interest was such that the public queued to visit the excavations and its future was the subject of intensive media compaigns which finally resulted in the removal and reconstruction of the site. In essence the reconstructed temple represents one of the first examples of development related archaeological conservation. The interest lies more in the Roman fabric than in the 1960s reconstruction. The adjacent Bucklesbury house and Temple Court were designed by O Campbell-Jones & Sons, 1953-1962. These structures and the plant room beneath the reconstructed temple are not regarded as possessing special interest.
SOURCES:
Grimes, W F, `The Excavation of Roman and Medieval London', 1998, Routledge and Kegan Paul.
Schofield, J and Maloney, C (eds), `Archaeology in the City of London 1907-91: a guide to records of excavations by the Museum of London', The Archaeological Gazetteer Series Vol.1, 1998, Museum of London.
Sheperd, S, 'The Temple of Mithras London' Excavations by W F Grimes and A Williams at the Walbrook', Archaeological Report 12, 1998, English Heritage.