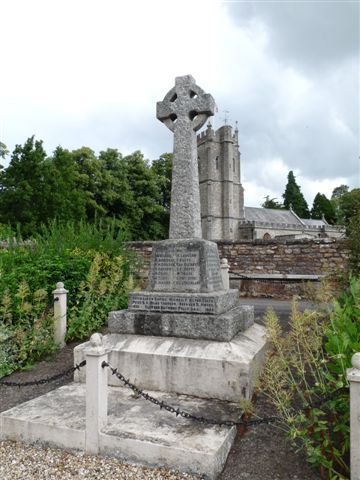 II
War memorial close to churchyard. Early C20. Rough hewn granite stone cross and shaft upon tapering plinth. The cross head is in the style of a Celtic cross. The inscriptions on the plinth are in lead lettering and reads as follows:
South east face: WE PRAY YOU TO REMEMBER THE MEN WHO LEFT THIS PARISH/WHO LAID DOWN THEIR LIVES IN THE GREAT WAR 1914-1918/AND THOSE WHO FELL IN THE SECOND WORLD WAR 1938-1945. North west face: REST ETERNAL GRANT THEM O LORD. South west (roadside) face: FOR GOD, KING AND COUNTRY and a list of names of those who were killed in both Wars.

SUMMARY OF IMPORTANCE: War memorials are the most vivid reminder of the losses suffered during war. As commemorative structures they have strong connections to their local communities. This simple granite cross stands as an arresting monument within the village of Bradford-on-Tone and commemorates the men of the parish who lost their lives in both the First and Second World Wars.