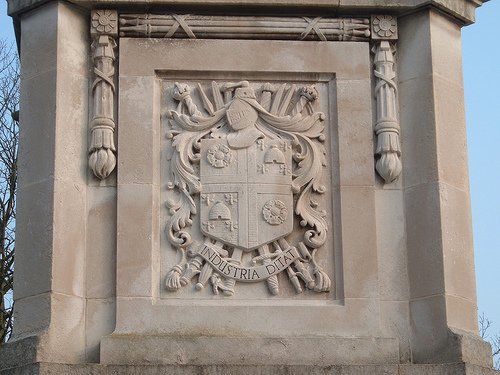 North face: 'THEIR NAME LIVETH FOR EVERMORE' and carved foliage design beneath.

HISTORY: Several designs were submitted for the commission of a war memorial at Victoria Park. Harold E Davies' design was finally selected and the memorial was unveiled in a ceremony on 28th September 1921 after a civic procession from Widnes Town Hall led by the Mayor and the 17th Earl of Derby, K.G.. A further eight bronze plaques bearing the names of 289 local men killed during WWII were unveiled in a ceremony in April 1950 led by the Mayor.
The memorial cost £6000 and was paid for by public subscription. Herbert Tyson Smith was the sculptor and Messrs Stewart Jones, the builders. A further £4000 raised was used to establish a social fund for the poor of Widnes.
Documents and periodicals were built into the foundations of the memorial as a time capsule and record of the time to be uncovered by future generations.
A small number of bronze name plaques were stolen in the late 1970s/early 1980s but all were later recovered and reinstated although some were damaged and had to be replaced. It is unknown which are the more modern replacements.

SUMMARY OF IMPORTANCE: Intricately carved and highly imposing war memorial in an obelisk design dating to 1921 and commemorating the men of Widnes who lost their lives during the First and Second World Wars (plaques for the latter were added in 1950 along with an inscription).
Incorporating symbolic imagery, richly detailed carvings, and standing more than 50 feet high, the memorial is a striking and prominent architectural feature within Victoria Park and the local area. The fact that the memorial's sculptural work was carried out by the nationally significant artist Herbert Tyson Smith further enhances the memorial's special architectural and historic interest. Consequently it is listed at grade II.