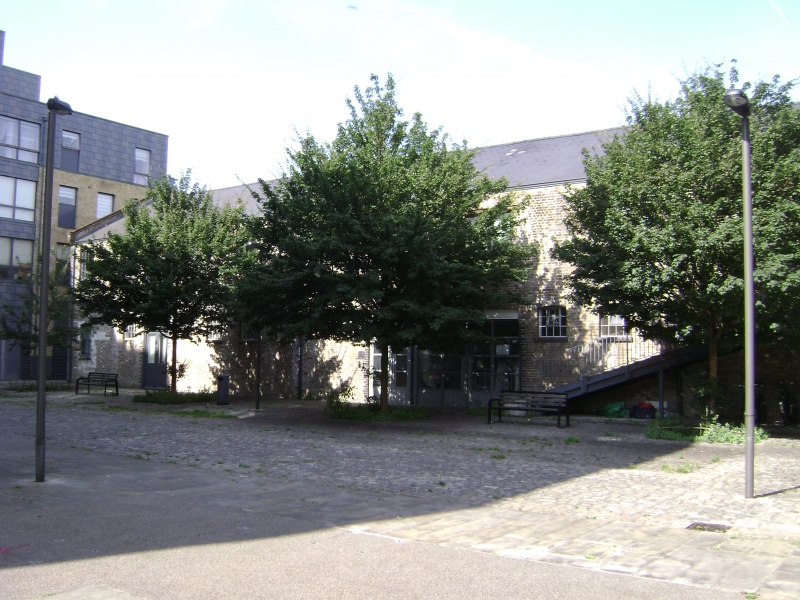 EXTERIOR: 22-24 (even) Hertford Road is an L-shaped stock brick building comprising north and west ranges with engineering brick dressings and a replaced tile roof. The later north range is of special interest as a multi-storey stable building; the function is clearly readable in the fenestration across both the north and south elevations of the range which comprises a consistent run of small windows in engineering brick surrounds set high in each storey to provide light and ventilation to the horse stalls below. Also of special interest is the unusual survival of a ramp which provided access to the first floor of the north range (and now, through a later insertion, to the west range) and runs alongside the eastern elevation of the west range. The stone paved ramp has periodic courses of raised setts to provide grip for ascending horses and is supported on I-section metal beams. Photographs taken in the 1990s show that it once had a canopy, as also evidenced by the scarring in the brickwork of the abutting building. The ramp is likely to have once continued at a right angle, alongside the southern elevation of the north range, to provide access to the stables on the second floor of this range; diagonal lines along the brickwork of this elevation and infilling of what was presumably a door in the centre of the second floor are strong indicators of this arrangement. The ground floor of the north range has five workshop units - each containing a varying number of windows and an off-centre door - supported by a metal lintel which were part of the original construction and may have housed horse-carts.

The earlier range to the west has two storeys and a number of segmental-headed window openings with engineering brick surrounds. The ground floor windows indicate this storey was built as stabling; the first floor windows, and a loading bay, are larger and irregularly spaced suggesting this floor may have served a different function. There are similar stable windows to the ground floor of the eastern elevation, though those at its southernmost end have been obscured by a later single storey extension. Other windows in this elevation have been replaced in the late C20. This range is not quite as striking in its scale and fenestration as the north range but is included in the listing for its special interest, manifest in its shared historic significance, continued physical connectedness, readable stable-function at ground floor level, survival of cobbled floor and roof structure, and the particular interest of the attached ramp to the north range along its eastern elevation.

INTERIORS: The interiors of each range are connected by metal fire doors which survive in situ. The original ladder-like staircases survive in parts, but the stabling and any other internal joinery has been removed. There are some stone setts on the ground floor of the west range and the timber roof structure of both ranges survives, as do the steel beams and columns which support the concrete floors.

HISTORY: The stables were built for a Mr Henry Crane, a contractor, who had been based on part of the site since the 1880s, taking over its full extent in 1895 when he also expanded to a site further south on Hertford Road. This success no doubt funded the new buildings on the site which Crane occupied until the 1930s.

Crane is described in contemporary Post Office directories as a 'Cartage Contractor' who also had depots at Unicorn Wharf in Bow and Archer Wharf in Limehouse. Crane supplied horse and carts to other trades-people, although at Hertford Road he may have been contracted to collect dust and rubbish as the Shoreditch Vestry dust depot was situated on the same street for the period of Crane's occupation. Since a Public Health Act of 1875, local authorities were required to arrange the removal and disposal of waste from households. The Shoreditch Vestry undertook this responsibility with some vigour and in 1895 built the Shoreditch Vestry Refuse Destructor and Steam Generating Station in Coronet Street, not far from Kingsland Basin. This building, which survives today but is not listed, generated 250 kWs of power for the local community and heated the public baths in Pitfield Street and had the motto E PULVERE LUX ET VIS (from dust, light and power) carved in terracotta on its façade. Given the size of the stables at the west range, large-scale activity such as municipal dust collection and perhaps transportation to buildings such as the Coronet Street Refuse Destructor seems a probable purpose of supplying so many horses.

REASONS FOR DESIGNATION DESCISION: 22-24 (even) Hertford Road are listed at Grade II for the following principal reasons:
* the north range is of special interest as a rare survival of multi-storey stabling from the late C19;
* the massive scale of this accommodation for horses illustrates how commercial and industrial activity a hundred years ago relied on animals, even though steam and electric vehicles were becoming more commonplace and this is of special historic interest;
* the ramp abutting the west range, complete with its cobbled surface and raised setts to assist horses in climbing the incline, is a relatively rare survival and of particular interest;
* the exterior of the north range and the ground floor of the west range are comparable to the Whitbread Stables in Islington and those on Winsland Street in Paddington which also have long elevations of three storeys with consistent runs of small windows.