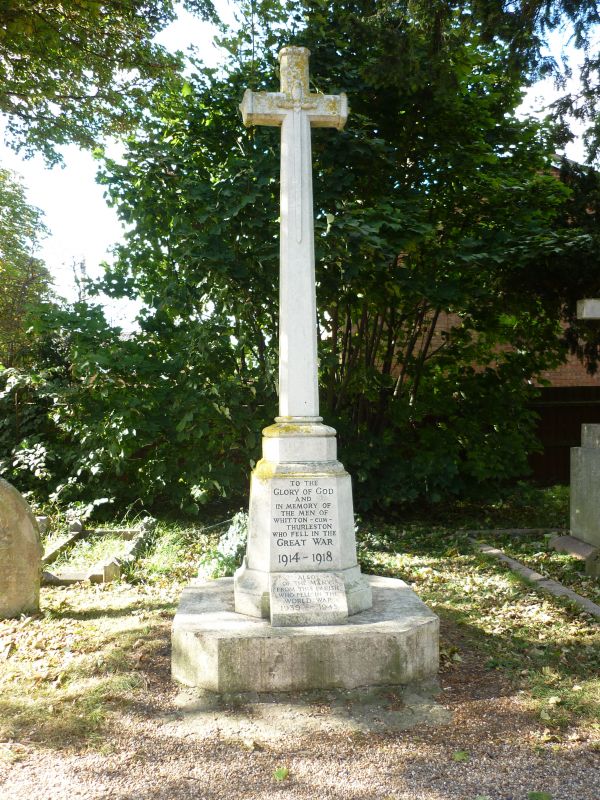 II
Portland stone Latin cross on a stepped pedestal base, unveiled 1921, to a design by H Munro Cautley. The sword of sacrifice is carved in relief on the east face of the shaft and the corners of the shaft and base are chamfered. There is a plaque at the base of the pedestal. The inscription runs around three sides of the pedestal and reads: 'TO THE/ GLORY OF GOD/ AND/ IN MEMORY OF/ THE MEN OF/ WHITTON-CUM/ THURLESTONE/ WHO FELL IN THE/ GREAT WAR/ 1914-1918/ (names: surname, rank and regiment) AND ALSO FOR THE MEN FROM THIS/ PARISH WHO FELL IN THE / WORLD WAR/ 1939-1945/'.

History:
This war memorial was designed by H Munro Cautley, who lived in the adjacent parish and was unveiled on 6 November 1921 by Sir John Ganzoni. It is a central feature in the commemoration of those who lost their lives in both World Wars and an intrinsic part of community life. In 2004, the memorial was cleaned and some of the lettering re-carved and painted with the help of a grant from the War Memorials Trust.

Summary of importance:
War memorials have a very strong historical and cultural significance on both a local and national scale. This is a good example of a simple memorial by a well known architect in the form of a Latin cross with the sword of sacrifice carved in relief. It was unveiled in 1921 and a further inscription was added following the Second World War. The cross also has group value with the adjacent grade II listed church. Recommended for listing in grade II.

This List entry has been amended to add the source for War Memorials Online. This source was not used in the compilation of this List entry but is added here as a guide for further reading, 13 January 2017.