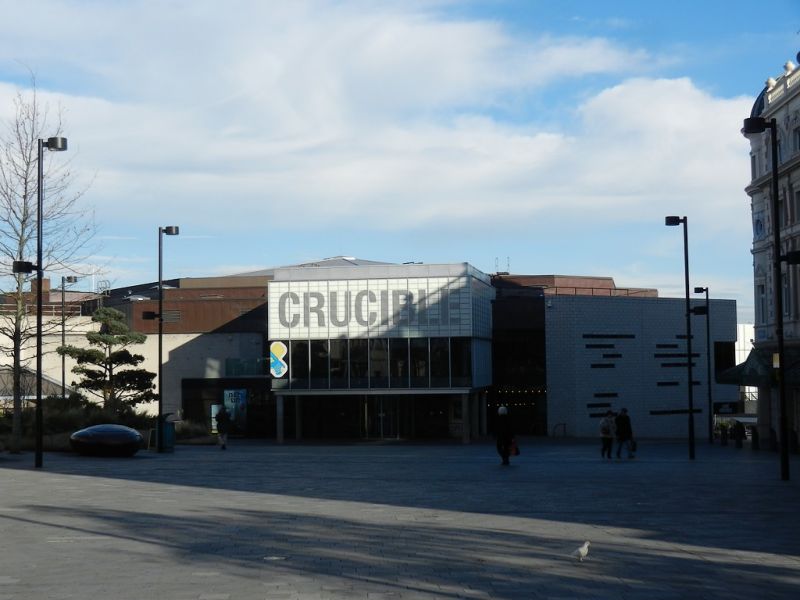 II
Theatre. 1969-71, with minor late C20 alterations and additions. By Nicholas Thompson and Robin Benyon of Renton Howard Wood Associates, in consultation with theatre designer Tanya Moiseiwitsch. Consultant engineers Ove Arup Associates. Reinforced concrete structure with exposed concrete blockwork walling, glass fibre fascias and a shallow stepped pyramidal roof with sheet metal covering.
PLAN: Irregular plan, responding to a significantly sloping site. The hexagonal form of the central auditorium is the dominant motif which imposes itself upon the surrounding foyer and circulation spaces to the south and the back-of-house facilities to the tall northern sector.

EXTERIOR: SOUTH ELEVATION. The main theatre entrance is sited on the lower south elevation, facing onto the public open space of Tudor Square, with a canted entrance canopy below a deep fascia. The glazed doors are set below a canted balcony with a set-back glazed screen to the rear. To the east, the ground falls away, with blockwork walling without openings and a wide fascia extending to the Arundel Street frontage. The building returns at an angle onto Arundel Street, with a deeply-recessed secondary entrance doorway and display window forming a glazed screen below a wide band of blockwork. Above the entrance screen, a recessed balcony with set-back glazing which extends to the right as a glazed screen wall set between the blockwork band below and the deep fascia above.

EAST ELEVATION: This elevation reflects the slope of the site, with a deep lower ground floor incorporating a shallow band of windows at the wall head. The upper floor has a deeper band of glazing which lights the foyer area set above the wide blockwork storey band extending from the secondary entrance. Above this, the fascia and the upstand of the stepped roof emphasises the increased height and mass of the building as the ground drops away to the right. At the north end of the west elevation, the tall foyer windows end in a wide band of blockwork which extends to an angled north corner tower.

NORTH ELEVATION: the building returns westwards with angled blockwork walling incorporating 2 bands of narrow glazing, and continues as a long frontage expressing the maximum height differential between front and rear of the site. This has 4 bands of narrow glazing, and returns by means of an angled corner at the stage door entrance, deeply recessed below the cantilevered upper floors.

WEST ELEVATION: Directly to the south of the stage door is a tall vehicular entrance to the loading bay with splayed side walls. The east wall continues to the angled return onto the south elevation, where a deep canopy extension to the original design covers the entrance to the Studio Theatre and lower foyer.

INTERIOR: The public spaces of the theatre interior are arranged on 2 main levels, with access from the main entrance foyer downwards to the Studio theatre, relocated ticket office cloakrooms and toilets and upwards to the main auditorium, foyer bar and cafe spaces. Wide stairways with polished concrete and exposed concrete block flanking walls provide access between levels. The main auditorium is accessed by means of 5 tall doorways, and is made up of 4 areas of steeply-tiered seating arranged around the 5 sides of the thrust stage. Let into the seating at stage level are 2 angles allowing access for performers to and from the front of the stage. Above the auditorium there is an extensive lighting gallery formed with intersecting catwalks. Below the stage is an extensive understage area, incorporating the steelwork which supports the stage. This steel framework can be lowered in height according to the needs of specific activities in the auditorium. To the rear of the stage is an extensive back stage area, leading to a store bay, extensive carpenters shop, paint shop and the loading bay. To the west of the auditorium is the Studio Theatre, with its own lower foyer area and access from Tudor Square. To the east and west are rehearsal rooms and dressing rooms, with further dressing room, office and service facilities in the rooms above, all with mainly utilitarian blockwork wall finishes.

HISTORY:
The Crucible Theatre was planned as part of a civic development in Sheffield city centre, as a replacement for an existing repertory theatre. Its design was strongly influenced by the ideas of Sir William Tyrone Guthrie (1900-1971), the most significant theatre designer of the second half of the C20 whose theories influenced almost every new theatre, particularly those built in England from the 1960's, including the Chichester Festival Theatre (1962) and the Olivier Theatre (1976). Guthrie's experience of staging a production in the Assembly Hall of the Church of Scotland at the second Edinburgh Festival in 1948 was revelationary, with the thrust stage of the Assembly Hall making for, as he saw it, a much more dynamic and participatory relationship between performers and an audience ranged around them on 3 sides, than was possible in a theatre which separated the 2 elements either side of the proscenium. The Crucible is considered to be the most ambitious of the local authority funded theatres designed for a repertory company, and was the first open-stage theatre commissioned for a resident company. It enjoys a reputation as one of the most innovative and successful regional theatres and is additionally renowned as the venue for the World Snooker Championships.

The Crucible Theatre forms a group with The Lyceum Theatre, the Central Library, The Roman Catholic Cathedral Church of St Marie, The Upper Chapel and the Victoria Hall Methodist Church (q.q.v.)

SUMMARY OF IMPORTANCE:
The Crucible Theatre,completed in 1971 by notable theatre designers Renton Howard Wood Associates, is of special architectural interest as one of a small number of innovative post-war theatre designs directly influenced by the celebrated theatre designer, Sir Tyrone Guthrie and his associate Tanya Moiseiwitsch. At the time, the Crucible was the most ambitious theatre project of its type, a repertory theatre funded by a local authority for a resident company. It thus commands a significant place in the history of theatre design and development in post-war Britain, both in terms of how the theatre was intended to function, with a fully demountable thrust stage, and in its external appearance, with exposed block walling and sharply angled profile creating a theatre building unlike any other at that time. It is an important member of a strikingly varied group of listed public buildings in Sheffield City centre, including the adjacent Lyceum Theatre, the Central Library, The Roman Catholic Cathedral Church of St Marie, The Upper Chapel and the Victoria Hall Methodist Church.

The Crucible Theatre is one of a group of theatres which are considered to be the most influential and architecurally distinguished examples of their generation. The strong influence of Sir Tyrone Guthrie, and his associate Tanya Moiseiwitsch is clearly seen in its design. It displays a number of innovotive features of architectural interest; for example, the design of the thrust stage; the profile of the building and the relationship it has with the landscape as well as the exceptional use of concrete blockwork, both on the interior and exterior.

These architectural features, the added interest of the building's role in the regeneration of Sheffield and its ambitious nature as a project cement its importance in the history of theatre design. The Crucible Theatre also stands close to the listed Lyceum Theatre, and other listed C19 and C20 public buildings with which it has strong group value.

The Crucible Theatre has significant special interest, in a national context, to merit listing at Grade II.