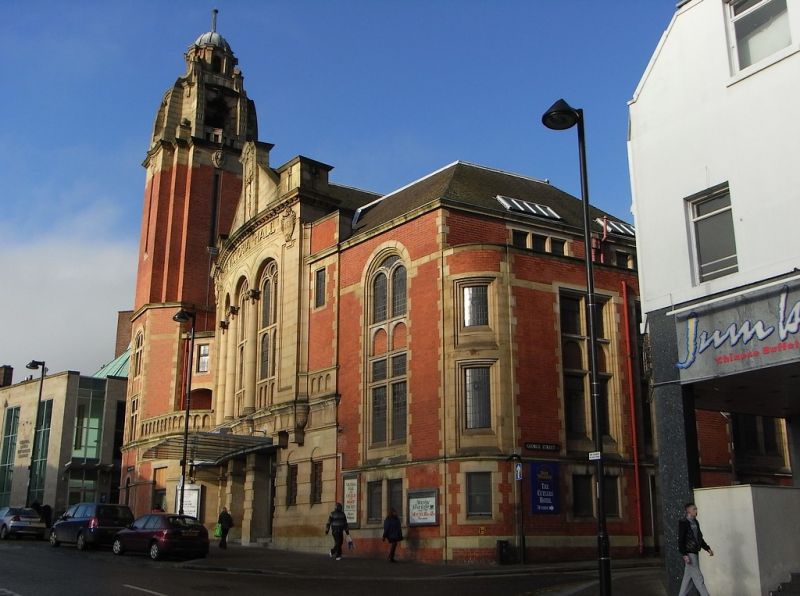 Methodist church, adjoining meeting rooms and area railing.
1906-08. Won in competition by Waddington, Son & Dunkerley of
Manchester; modified and completed by WJ Hale. Remodelled
c1960. Red brick and ashlar, with ashlar dressing and hipped
and gabled slate and glazed roofs. Arts and Crafts style.
EXTERIOR: plinth, quoins string courses and eaves cornice.
Main body with vestries, meeting rooms and south-west tower.
Windows are mainly mullioned and cross mullioned, all with
leaded glazing. West end has projecting central feature with
large panelled flanking pilasters with wreaths, rising through
a dentilled cornice and topped with corniced dies. Coped gable
with projecting central feature with segmental pediment
containing crest. 3 tall round-arched 2-light windows with
tracery, separated by Ionic pilasters. At the foot of the
windows, a blind arcade, which continues as the parapet of a
small balcony to left. To left, a corridor with 2 single light
windows. To right, a tall projection with a single window.
Below, rusticated ground floor with triple entrance under
canopy, 1966, flanked to left by a showcase and to right by 2
single light windows.
Right return, to George Street, has in the centre a single
storey section above a basement, 4 bays. Full height flying
buttresses also forming the piers to the area railing at
ground level. 4 moulded round-arched windows, 3 lights.
Basement has 4 plain round arches and area lined with glazed
brick.
To left, a hipped block, 2 storeys plus attics; 2 window
range. 2 large flat-headed 3-light windows with central
round-headed blank panels. Left return has a tall round-headed
2-light window. Attic has two 3-light mullioned windows.
Ground floor has a 2-light mullioned window and a C20 steel
shuttered door.
To right, a projecting square porch, 3 storeys; 3 window
range. Two 2-light mullioned windows with sillband, and above,
a central single light window flanked by two 2-light ones.
Below, to left, 3 flat-headed barred windows. To right, an
entrance with multiple recessed doors, heavy multi-keystone
lintel and above it, a Diocletian window.
Left return, to Chapel Walk, has a 2-storey central section, 4
bays, with parapet. Four 3-light mullioned windows and below,
a round-arched arcade with late C20 shopfronts and reglazed
overlights. To left, a gable with a 4-light window and below,
a late C20 chamfered entrance with sidelight.
To left, a 3-storey block; 6 window range. To left, 4
Diocletian windows. To their right, a transomed window, then a
canted stone oriel window, 5 lights. Above, 6 cross mullioned
windows, 2 and 3 lights. Below, late C20 shopfronts. To right,
a double gable with two 2-light round-headed windows and
below, a single light window flanked by single 2-light
mullioned windows, all with flat heads.
South-west tower, 4 stages, has string courses and cornice.
Lower 2 stages are canted, upper stages have double rebated
angles. Ground level has to south and west, a round-headed
single light window and between them, a flat-headed window,
with linked impost and lintel band. Second stage has to south
and west one cross casement above another, the upper ones
round-headed. Third stage has a very narrow slit window on
each side. Bell stage, to Hale's design, has a projection on
each side with enriched incurving cheeks, and between them a
round-headed bell opening with round head and heavily
rusticated keystones. The tower is topped with a domed
octagonal lantern with 4 openings.
INTERIOR: main body has 5 bay round-arched arcades with square
piers and wreaths in the spandrels, carrying a moulded and
enriched aisle plate on scroll brackets. Segmental arched
glazed panelled roof with patterned stained glass and wreathed
medallions at the springing of the main ribs. East end has
moulded segmental arch with screen, 1966. West end has gallery
with coffered ceiling. Aisles are screened off to form side
rooms. Fittings all 1966.
WJ Hale, 1862-1929, designed a number of noteworthy schools
and Nonconformist churches in Sheffield between 1893 and 1929.
(The Buildings of England: Pevsner N: Yorkshire: The West
Riding: London: 1967-: 453; Researches by G Hague, Sheffield
City Council).