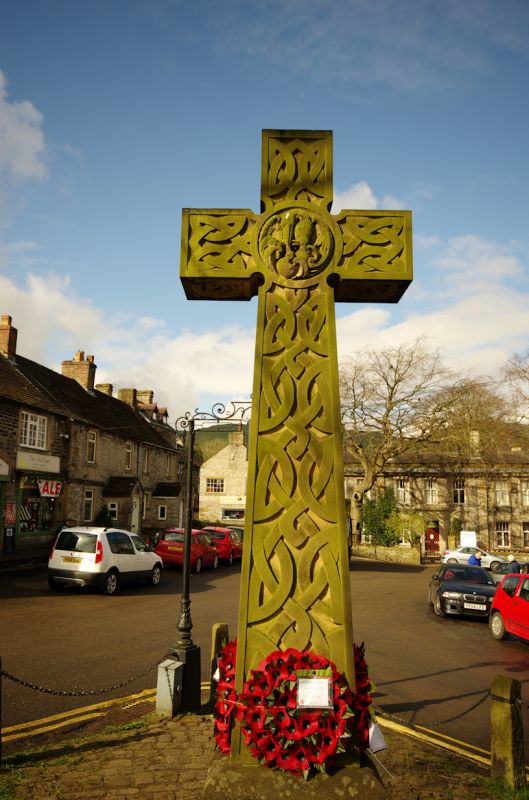 EXTERIOR: An ornately carved Latin cross mounted on a square base. The west side of the cross is carved with an angel of victory holding a sword, and above it a recumbent deer inside a laurel wreath. On the east side there is a mythical bird on a nest with four chicks. The background carving is in the form of Celtic knots on the east and west sides and swirls on the north and south sides. There are inscribed metal plaques on the base of the cross on the west side, and on a stone lying at its foot. Around the cross on three sides there is a low stone wall with holes for flower vases.

HISTORY: The memorial was erected by public subscription to commemorate the men of Castleton who were killed in the First World War. It was unveiled by Major S. Hill-Wood on 18 October 1919. The memorial was designed by L. G. Whitehead and constructed by Messrs William Gregory and Son. The inscriptions were by J. Whiteside and the stone carving by Messrs J. Beresford and Son. A dedication to the fallen of the Second World War was added later. In 1984 the base rock garden was replaced by a stone wall with holes for vases.

REASONS FOR DESIGNATION DECISION:
Castleton War Memorial is designated at Grade II, for the following principal reasons:
* It is a poignant reminder of the impact of the First and Second World Wars on the local community
* It is well designed and has high quality carvings by Messrs J. Beresford and Son
* It has Group Value with a number of listed buildings around the Market Place
SK1502482801

This List entry has been amended to add the source for War Memorials Online. This source was not used in the compilation of this List entry but is added here as a guide for further reading, 25 January 2017.